Yum! Brands, Inc (NYSE:YUM), the parent company of Kentucky Fried Chicken (KFC), Pizza Hut, and Taco Bell reported quarterly financial results that beat the estimates of Wall Street analysts, which lifted its stock price by more than 4% to $68.94 per share after hours.

Yum! Brands, Inc (NYSE:YUM) said its total revenue rose 1% from $4.15 billion to $4.18 billion in the fourth quarter. Its revenue is lower than the $4.26 billion projected by analysts.

David Novack, chairman and CEO of Yum! Brands, Inc (NYSE:YUM) said, “While 2013 was a challenging year, I’m pleased to report continued progress as we enter 2014 with fourth-quarter EPS growth of 4%, excluding Special Items. More importantly, with the decisive actions we’ve taken to strengthen our company across the board, we are well positioned to deliver double-digit EPS growth in 2014 and the years ahead.”

During the quarter, Yum! Brands, Inc (NYSE:YUM) said its sales and profits in China were negatively impacted by the poultry incident and subsequent reports about avian flu in the country.

According to the restaurant chain operator, its same store sales in the United States declined 2% for the quarter, and flat for the year including a 3% growth at Taco Bell while KFC and Pizza Hut recorded 2% declines.

Yum! Brands, Inc (NYSE:YUM) said its system sales in India grew 22% for the quarter and 20% for the year. According to the company, a unit growth of 24% contributed to the increase in system sales, but it was offset by a 4% decline for the quarter, and 1% drop in same store sales in 2013.

According to the company, emergency markets system sales increased 11% for the quarter and for the entire year. YRI division opened 1,055 new units in 78 countries including 488 units for the quarter. The company said 89% of all new units were opened by franchisees during the year.

Zacks Research Investment Research noted that China remains a primary market for Yum! Brands, Inc (NYSE:YUM), which accounts 50% of its sales. “For now it seems the other businesses, especially within YRI, have carried the company through to the earnings beat. Putting these serious avian flu problems behind them for good would likely demonstrate some strong upside for the shares,” according to the investment research firm.

Yum! Brands, Inc (NYSE:YUM) is currently in an elevated risk state based on the risk management algorithms of Smartstops.net. The risk monitoring firm indicated the stock entered its current risk level when it started trading at $72.24 per share on December 12. 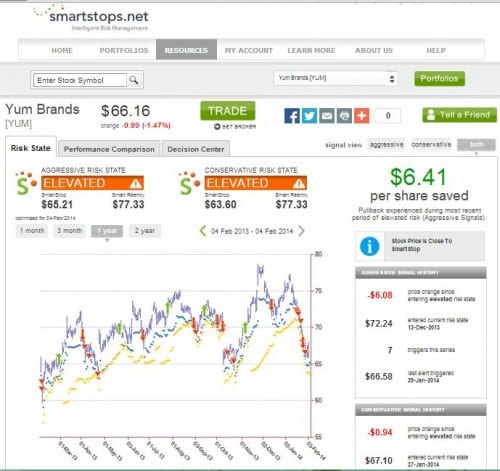 Investors who pulled out their investment on the stock when they received an elevated risk alert from Smartstop.net saved $6.41 per share.