Opptrends 2021
Home Entertainment You Won’t Believe What The Rock’s Message To Conor McGregor Was! 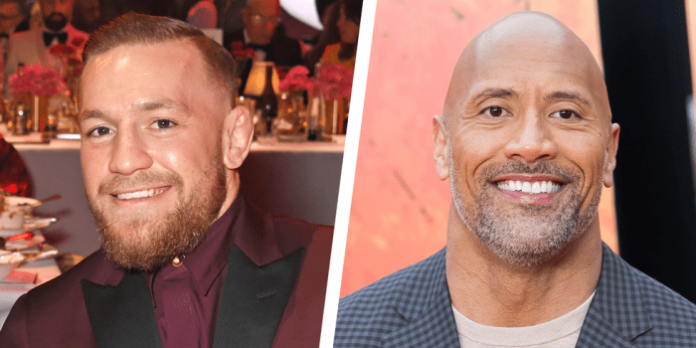 Conor McGregor and Dwayne Johnson had a friendly exchange on Instagram, and this was a chance for UFC fighter to learn a thing or two about mannerism from People’s Champ.

At the moment McGregor is awaiting a trial scheduled for June 14th, and he certainly feels uneasy because of that. But, that’s what you get for throwing a trolley at a bus. If McGregor feels down because of what he did, and the place he is right now, Dwayne Johnson is probably the best person he can talk to.

After watching Conor McGregor’s documentary titled Notorious, People’s Champ had words of praise for The Irishman. Talking about HBO’s documentary film Johnson wrote: “Great insight into the DNA of this successful and smart business man. Best part of his success, is when you strip it all away — it will always come down to being the hardest worker in the room. Those roots never go away. Solid doc. Well done brother.”

McGregor, who was silent on social networks compared to what we used to hear from him was moved by Johnson’s words: “Thank you Rock! Your work ethic is inspiring to me, and I appreciate these words very much! Big respect my Uce.”

Now that the two of them developed a seemingly good relationship there are few things Conor could learn from The Rock.

First thing first. The most obvious thing not to do is not throwing trolley at buses, or anything for that matter. Dwayne never did something similar, nor he would ever do. Not because he has a public image to preserve, it’s because he’s not that kind of a man, nor anyone should be.

The other one is that he shouldn’t only use his stature and popularity to promote himself and his lifestyle. He should share his experience with people and motivate them to be better with every passing day, just like Dwayne does.

Just look at the words that Johnson shared with young Los Angeles Lakers players: “We’re gonna have times in our lives where we get f***** up and knocked down. It’s a very defining moment when that time comes because you can either say, ‘I’m done’… or you can fight thru your pain — physical or emotional — get back up and finish the job.”