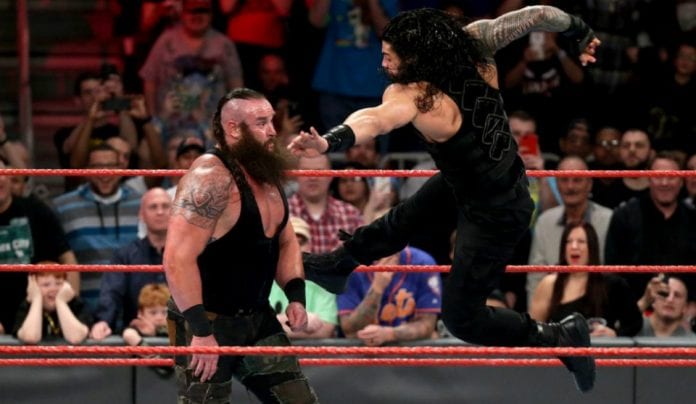 Most of the people picked Braun Strowman in this match as there is no way that the company can have him lose a battle after looking so dominant and as unstoppable as he did over the past couple of weeks. Nobody was immune to his attacks, including Roman Reigns who was his favorite victim. Still, when somebody is going up against Vince’s Golden Boy Roman Reigns, it is hard to bet against him.

Roman is one of the most pushed superstars in recent memory so there is no doubt that the fans that picked him to win this match had a point and nobody could really tell them that they are going to be wrong for sure. This guy wins most of the time. When he loses, it is usually by some kind of tricks of the heels and not by a clean pin. But, when you have a monster heel like Braun, you can’t have him win by shenanigans.

Reigns did get some offense at the end of the match. He looked decent, so Vince was able to protect him at least just a little bit. Two Superman punches were enough to put Strowman down, but the third missed. Strowman picked up The Big Dog, couldn’t put him down for a three count after the first power slam, but picked him up again, power slammed him to the mat once more, and the Roman Empire couldn’t kick out again. It was a positive surprise as the last time when Roman was pinned clean was when he lost to Finn Balor in August, and that only happened because the company was punishing him for violating the wellness policy.

This is a huge win for Braun Strowman and a clear indication that the WWE and Vince believe in him and have big plans for this wrestler in the future. Good booking decision.