Cowboys’ biggest need in the offseason is not to bring in players but to retain their free agents. The most important piece in Dallas’ D-line is DE DeMarcus Lawrence. Big D franchise must do everything in their power to resign this man. Last season Lawrence had a career year and recorded 14.5 sacks.

America’s Teams is looking to tie him to an LTD, but if they fail to reach an agreement this offseason, they will franchise tag him. This move will pay DeMarcus $17.5 million. Both parties are working on an extension, and according to latest news if none is reached Lawrence has no issues to play under the tag. Mostly because $17 million is what he wants yearly on a long-term deal. Another player from the defense roster, David Irving, is going to be an unrestricted free agent, and Big D franchise is also looking to keep him in Texas. 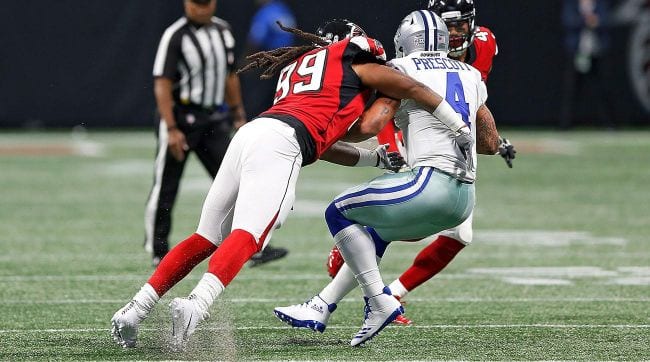 Keeping these two players on the roster will make Cowboys D a force to be feared, but they could also use more depth. The player to answer their needs could be found in free agency. One of the guys who will be available in FA this spring is Adrian Clayborn who wrecked havoc on O-line and Dak Prescott last year when Cowboys played Falcons.

During the match in Atlanta Clayborn recorded six sacks playing against Chaz Green who was filling in for injured Tyron Smith. He finished 2017 with 9.5 sacks, so it is evident that he wasn’t consistent through the entire season. The match vs. Cowboys was his career game. This is why he would come cheap to be a backup for Dallas starters.

Dallas Cowboys were interested in him in the past during both 2015 and 2016 offseasons. So, it wouldn’t come as a surprise for them to rekindle their interest in Adrian Clayborn. He will be 30 years old this year and has been in the NFL for seven seasons with Buccaneers and Falcons.

What do you think, is Adrian Clayborn a player to add quality and depth to Dallas Cowboys roster?

Richard Orland - October 7, 2022 0
The share of passive mutual fund investments in the total asset management industry AUM has been growing at a fast pace in developed markets...

Who Are The Favorites To Win The Ballon d’Or 2022

Is Refractive Lens Exchange the Same as Cataract Surgery?