Opptrends 2021
Home Sport With Bryant and Witten out, Cowboys Did Well To Replace Them 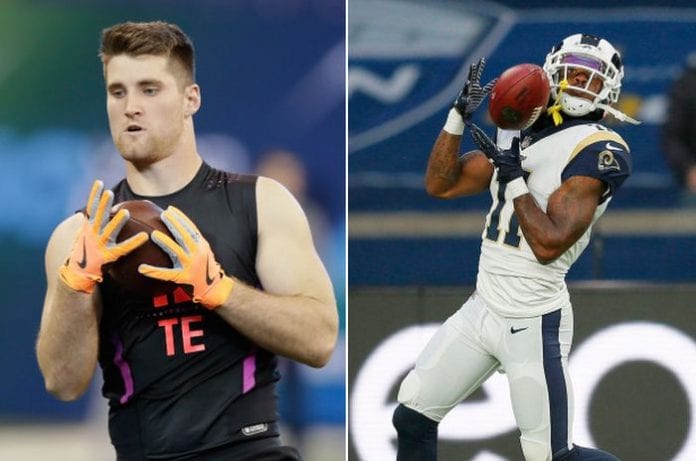 Dallas Cowboys overhauled their receiving corps in recent weeks. They released Dez Bryant and signed Allen Hurns and Deonte Thompson in free agency. Analysts believed that even with these moves America’s Team needed to draft a receiver in the first round of 2018 NFL Draft.

Cowboys top brass thought otherwise as they believed that most of the work was done in FA. They only targeted WRs in later rounds. But, another issue arose when their legendary tight end Jason Witten announced retirement, so the TE position became a priority. Witten will most likely join Monday Night Football on ESPN.

In the end, Big D franchise managed to fill all holes. With their top touchdown and receiving leaders in Witten and Bryant out of the building, moves for WR and TE were a must. In the third round Cowboys picked up Michael Gallup and traded their six-round pick for Los Angeles Rams RB/WR Tavon Austin. Their tight end of the future is Stanford’s, Dalton Schultz.

Without Bryant on the roster, Cowboys now don’t have a clear-cut No1 receiver. Jones explained that their offensive philosophy based on the run game and Ezekiel Elliott doesn’t need a top receiver. With Terrance Williams and Cole Beasley already on the team, and speedster Deonte Thompson in the mix Dak Prescott will have multiple targets.

Cowboys also shipped Ryan Switzer to Oakland in exchange for Raiders defensive lineman Jihad Ward. We also shouldn’t forget WR Cedric Wilson from Boise State which was drafted in the sixth round.

After all the deals including wide receivers and tight ends Dallas Cowboys vice-president Stephen Jones said that the franchise did what they intended all along. Jones Junior stated: “When you lose a player like Dez and what he’s brought to the table throughout his career, we’re remaking our receiving room. I do think we wanted to do things that, as Jerry has said, that’s Dak-friendly.”