Cody Rhodes won the ROH world title just a couple of days ago, and many people are happy for him. Current and former WWE stars have gone to Twitter to congratulate him on this big accomplishment and the success that he has enjoyed outside of the WWE. Among those people that have done that is one of the greatest stars in the WWE and a current GM of Smackdown Live Daniel Bryan.

He also suggested that he might be going after Cody Rhodes in 462 days, exactly when his deal with the company runs out. Multiple doctors have cleared Daniel Bryan to make his in-ring return, but Joseph Maroon, the WWE doctor, has said no to that. Because of this, Daniel Bryan had to retire as he couldn’t go anywhere else to wrestle since the deal that he signed is holding him back until the next year.

Daniel Bryan has said that he is working on his return. If the WWE is not going to let him wrestle, he is going to go somewhere else. As we are getting closer to the end of his deal, the WWE will seriously have to think about what they are going to do. Are they really going to let go of one of the most popular wrestlers since the days of The Rock and Stone Cold Steve Austin? Did you see what kind of reactions he was getting?

There is no doubt that he is still the most over personality in the company, even though he is not wrestling anymore. Bryan was the guy that was supposed to replace John Cena. Maybe him teasing wrestling for another company will either force McMahon to clear him or maybe pay him more money to stay put. Who’s to say that Bryan can’t be the face of NJPW if WWE doesn’t let him work in the ring? 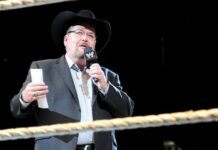