The Cowboys fans want to see a lot of free agent and available players on their team but there are some positions that are stacked, and one of those positions is WR. The Cowboys can be pretty satisfied with veterans such as Dez Bryant, Terrance Williams, and Cole Beasley, but there are also Ryan Switzer, Noah Brown and Brice Butler to replace them if something happens.

But what if the Cowboys added Eric Decker to the team? That would be interesting at least. According to the New York Jets, the team is looking to trade for an experienced WR Eric Decker before they cut him. Decker is a 29-year-old player who struggled last season with a shoulder injury and played only three games.

However, Decker will be a potential threat if he ends up on the right team. Just two years ago he was just behind Allen Robinson in red zone touchdowns, and he was one of the best pass catchers for the Jets. He ended that year with 12 TDs and improved a lot after the poor 2014 season.

Meanwhile, the Cowboys focus on rushing game and Dak Prescott didn’t throw the ball a lot in the red zone, but this is one aspect of the game in which a young QB needs to improve. As a team, Dallas was fifth in NFL in converting red zone attacks to TDs. Speaking of their depth, they can always improve it by adding another WR. Decker is a player that would make the Dallas’ already dominant offense even more frightening.

At least, bringing Decker to the roster could push Terrance Williams to be more consistent. The bottom line is that adding of this guy is a low-risk move and he can bring more good than bad to the squad. The opposing defenses will get a headache when they are about to face the Cowboys because of so many different weapons. What do you think? Should the Cowboys try to pursue Eric Decker or not? 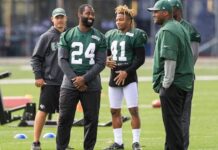 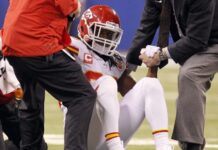