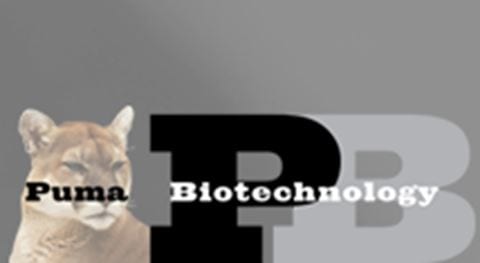 Investors who own shares of Puma Biotechnology Inc (NYSE:PBYI) are definitely euphoric and saying they hit the jackpot in the biotechnology sector. The stock price of the development-stage biopharmaceutical company surged nearly 300% to $295.44 per share today.

Puma Biotechnology Inc (NYSE:PBYI) closed at around $59.03 per share on Tuesday. The sudden substantial increase in its stock price was due to positive results of the Phase 111 clinical trial of its investigational drug for breast cancer called neratinib.

According to Puma Biotechnology Inc (NYSE:PBYI) the primary endpoint of the neratinib clinical trial was disease free survival (DFS). The results of the clinical trial showed that patients who received treatment with neratinib improved DFS 33% compared with placebo.

Puma Biotechnology Inc (NYSE:PBYI) said it will file for a regulatory approval for neratinib in the extended adjuvant setting based on the results of the clinical study in the first half of 2015.

Patients who participated in the clinical trial were women with early stage HER2-positive breast cancer. The term disease free survival means patients using the treatment will remain alive without signs of the the cancer.

In a statement, Alan H. Auerback, president and CEO of Puma Biotechnology Inc (NYSE:PBYI) said, “This represents the first trial with a HER2 targeted agent that has shown a statistically significant benefit in the extended adjuvant setting, which we believe provides a meaningful point of differentiation for neratinib in the treatment of HER2 positive breast cancer.”

“While the use of trastuzumab in the adjuvant setting has led to a reduction in disease recurrence in patients with early stage HER2-positive breast cancer, there remains an unmet clinical need for further improvement in outcome in order to attempt to further reduce this risk of recurrence. The results of the ExteNET study demonstrate that we may be able to provide this type of improvement with neratinib to further help the patients with this disease,” added Auerback.

Commenting on the positive results of the clinical trial, Howard Liang, an analyst at Leerink Swann LLC said, “The magnitude of benefits is among best-case scenarios that could be envisioned.”