Opptrends 2022
Home Sport Why Is The Viewership Bad For WWE This Week?

Even though the WWE is in the post-Wrestlemania period right now, and it is expected for the viewership figures to be usually worse than it is during the build-up for their grandest show of the year, the numbers that they are drawing right now are pretty bad. Yes, the product doesn’t have much heat at the moment as there are no big shows in sight and this is a transitional period for the company.

Still, it is not a coincidence that both Smackdown Live and Monday Night Raw had their worst drawing numbers in 2017 in the same week? Why is that the case? Well, the answer is pretty simple, and it is because of the NBA Playoffs.

Right now, the games are getting more important as the NBA Playoffs have reached conference semifinals stage. There are some pretty exciting games going on like the ones between the Boston Celtics and the Washington Wizards as well as battles that San Antonio Spurs is having with the Houston Rockets. With that being said, there is a match going on each and every night, so Monday’s and Tuesday’s are the days when WWE is competing with the NBA. Right now, they are losing that battle. 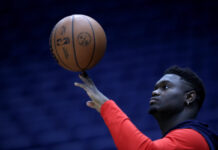