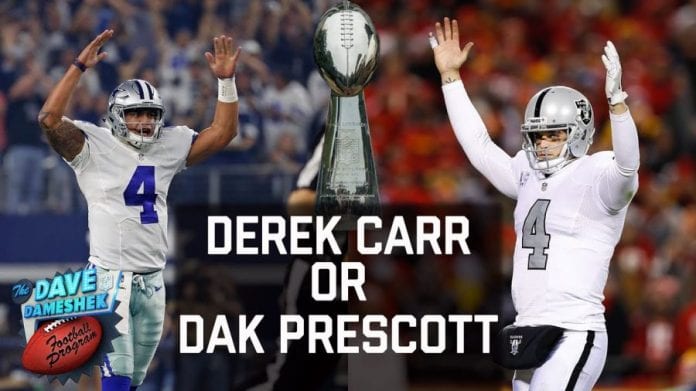 After the monster years that these two teams had in 2016, there is no doubt that the future is bright in the Bay Area and in the Big D. High goals will be set for the 2017 campaign as both of these teams showed that they are more than capable of competing for the number one overall seed in their respective conferences.

It looks like both of these franchises have found their man for the future at the quarterback position. Derek Carr just received a huge deal from the Raiders, and we can’t say that it’s not deserved. He has done so much for this squad that the fans will forever be thankful. The franchise that has been so bad for so long is now back in the Super Bowl chase.

NFC looks wide open yet again. We have a clue about which teams are going to be good and going to compete for the spot in the biggest game of the year, but we don’t know which squad should be the favorite. Dallas Cowboys are for sure one of those teams. In the AFC however, we have the New England Patriots. It is pretty hard to image anybody beating this amazing crew in the AFC. They are going to be favored to go all the way almost each and every year, which puts the Raiders and Carr in a tough spot. That is why the Dallas Cowboys and Dak Prescott probably have a better shot at the SB title than the Raiders.