Live the night intensely, and find out where to party in London!

You may have enjoyed London by day, visiting its parks and museums, and touring the city. But if after these walks, and a refreshing shower, you are willing to go out for a few drinks or visit the most famous clubs in London and you still do not know where the glamor of this city is hidden, continue reading this article to make your nights as intense as your days.

Soho is London’s most intercultural, bohemian, and liveliest neighborhood. This mile of narrow alleys is considered one of the most fashionable areas of the center of the English capital, where the most exclusive restaurants, pubs, clubs, and shops are, with some neon-lit sex shops as well.  It is also considered the gay district of London. We can freely say that the adult industry in London has been flourishing in the past years.

Soho was not always a fun, modern neighborhood. It became the residence of the British aristocracy in the seventeenth century, a block from brothels and seedy bars until 1986 when the English police decided not to renew the license to all those premises that were not worthy of such a famous city. Thus, the sex shops and brothels decreased, and modern apartments, nightclubs, and various shops were built, although they still coexist with places for adult pleasure.

In addition to being a gay neighborhood, Soho is a multicultural and bohemian neighborhood because many immigrants have chosen it as their home in London. There is also the famous Chinatown you shouldn’t miss seeing. Soho is undoubtedly the London site with the most extensive mix of races and cultures in the entire city.

The following is the list of top 11 VIP Nightclubs and bars in London:

It is one of the best-known concert halls in London where quality groups perform, moving between jazz and rock. They highlight the Saturday nights that they call “I love The 80’s vs. I love The 90’s”: an authentic retro party in which the most popular songs of the 80s and 90s are played, including Rock, Hip Hop and Britpop. You also have the option to reserve a table next to the dance floor if you want a calmer evening.

Without a doubt, that is one of the bars to surprise your date: walk with your girlfriend through Soho and enter a sex shop. A sex shop ?! Yes, you heard it correctly! Walk a little further, and one of the employees of this store will ask you if you have a reservation (small code to see if you know the secret). After telling him you want to enter the bar, he will let you in. Once inside, you can find good music, delicious Mexican food and have a fantastic and exciting evening with your date!

If you want to be extra playful, you can try one of London escorts from uEscort.com.

Get ready to enjoy London’s most acclaimed House sessions! Ministry of Sound is one of the places that are currently very famous in this town. The sessions are on Thursdays, Fridays, and Saturdays for House music, deep techno, fidget house, or electro. With four bars, five rooms, and three tracks, the party never ends at this disco.

As its name indicates, this club has the peculiarity of housing a Jacuzzi and a swimming pool in its facilities. Those are always ready to be enjoyed during special events. It’s a unique place to experience the live concerts and DJ sessions organized by the club.

Unique ambient with an extraordinary mix of reggae music and good Cuban rum. What more could you ask for? Live alternative music groups are common there and are always ready to celebrate all kinds of special events in their alternative way. This small Notting hill place will make you recover your passion for the essence of music and dance in an environment of healthy madness.

The café de Paris, in Piccadilly, is one of the most elegant, original and well-known nightclubs in the world. After nine decades of history, great artists and guests, political figures, and members of the aristocracy, such as Marlene Dietrich, Andy Warhol, George Michael, etc. have passed through its doors. Of course, you can not forget the portfolio if you want to enjoy its glamor, its live shows, and a fantastic party and fun atmosphere. And watch out! Remember to put on your best clothes, as they are very strict when it comes to allowing entry to the club.

Unlike many other bars in the city center, this is not a typical London bar. Locals enjoy this authentic gem (JEWEL) located in Piccadilly Circus, which is not so frequented by tourists. In addition to good food, it highlights its excellent selection of cocktails, good music, and a suggestive atmosphere with allusions to the fabulous tales of the thousand and one nights.

Set in seductive shades of red, this mysteriously decadent pub offers an exquisite cocktail menu to savor while the DJs offer funk, groove, or Latin jazz sessions. It is worth going between 7 pm and 9 pm, during the happy hour, since that is when drinks are half the price.

It is a club based on the purest cabaret style of the 1920s. Its schedule of events is endless with uniquely original shows on Saturday nights, better known as “kitsch cabaret,” in which drag queens and all kinds of dancers. In addition to the cabaret shows, on Fridays, they hold DJ sessions offering variations of R&B and Deep Funk, and on Sundays, they are dedicated to Soul.

Laughing out loud while enjoying a good glass of wine could be your plan for tonight if you are in London and decide to go to this well-known Club: The Comedy Store. This place was founded in the 80s, and since then, it has established itself as one of the most recognized when it comes to offering hilarious monologues and stand-ups, often improvised by the geniuses of humor who parade around its stage.

Without a doubt, one of the most typical comedy clubs in London where laughter and other types of performances are continually boiling. The venue has two faces: while a conventional bar welcomes you at the entrance, down the stairs is where the stand-ups, recitals and live music take place, all of them high-quality performances. In some of these shows, you must make the reservation through their website.

London is quite rightly called the Capital of Entertainment. There is something for everyone, from enjoying famous beer pubs to a great time at some of the world’s best clubs! 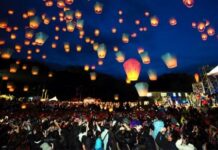 Get Out More: How to Enjoy All the Best Events in Your City