The Wrestlemania 34 is now behind us, and it was marked by Ronda Rousey’s in-ring debut. She was teamed up with RAW general manager Kurt Angle. This tag team defeated Triple H and Stephanie McMahon at the grandest stage of them all. The match was exciting, and those who doubted Ronda’s in-ring abilities are now her fans. But in the midst of her debut and pairing with Kurt Angle, most people forgot about her originally planned partner.

WWE had planned to pair her with The Great One just as they did at Wrestlemania 31. At the event at Levi’s Stadium in Santa Clara, California, The Rock and Rousey quickly defeated The Game and his wife. Chairman of the company Vince McMahon wanted the same team at WM 34. Pairing former UFC Champion with People’s Champ would be a huge draw for audience and viewers. But, the plan was discarded, and Kurt Angle got his chance. 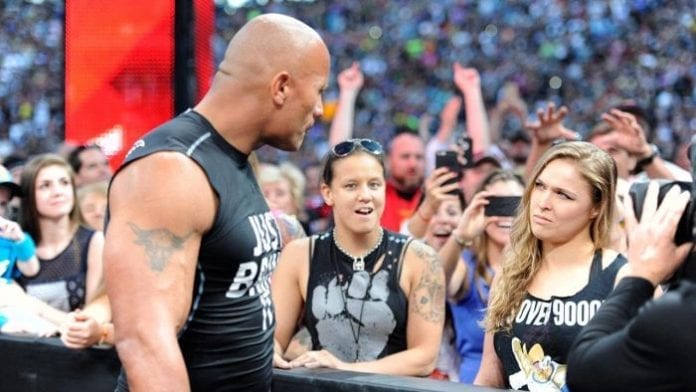 In an interview with Kiss FM UK, Dwayne Johnson confirmed that he wanted to appear at The Show of Immortals. The Rock said: ”Matter of fact, Vince McMahon and I were talking about two months ago trying to figure out what I was going to do if I went back to WrestleMania. He pitched me this really great idea that I’d get involved in a tag match with Ronda Rousey who is, of course, incredible and I’m very proud of her. We couldn’t make it work this time because I was in Shanghai. But, Who knows downline?”

As much as everyone loved this idea, Johnson’s tight schedule was the issue. With The Rock in the mix, this would be one of the biggest tag team matches in the history of wrestling. But, we’ll have to wait for another opportunity for Brahman Bull and Hunter to cross paths inside the ropes.

In recent years the Hollywood’s best-paid actor appeared only on the most significant PPV events, and many believed that he would be in New Orleans. But, on April 8th Rampage superstar was in Shanghai promoting his movie, and was unable to tell us what’s he cooking.