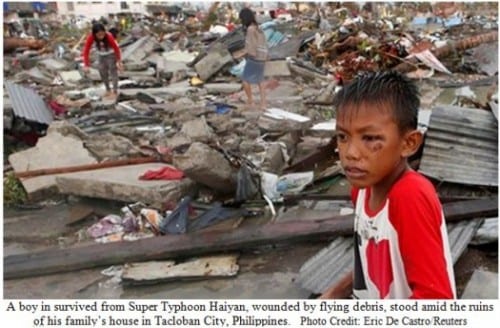 A national emergency has been declared by the Philippine president, Benigno Aquino to speed up the relief work for the victims severely affected by the Typhoon Haiyan. The badly affected areas include Leyte and Samar where maximum casualties have been reported.

Losses to the tune of $36 billion

Around 10,000 people have been killed by the deadly disaster in Tacloban City and other places, moreover, hundreds of thousands of people have been rendered homeless, according to estimate given by the officials. Typhoon has also affected about 2,000 people in Besey, which is a seaside town in Samar region, about 10 km across a bay from Tacloban in Leyte province.

The coconut and rice growing nation is expected to bear a loss of more than 3 billion pesos or $36 billion with private property facing massive losses, according to Citi research.

The roads and airports are also affected obstructing the rescue operations. The storm has now reached North Vietnam near the Chinese border, but has lost its severity.

Before the arrival of the typhoon authorities had shifted thousands of people to the rescue places, but some places like Schools, churches, government buildings failed to beat the winds and storm.

The people of Tacloban witnesses the maximum destruction as huge volume of water swept away the people, further indicating that the city was not prepared for the Typhoon disaster. The disaster was similar to the Indian Ocean Tsunami that took place in 2004.

Contributions from all around

Although, international relief effort to help out the victims are pouring in, but the rescue teams have managed only to reach the few of the effected towns and villages since the disaster.

Richard Gordon, head of the Philippines Red Cross told “There’s an awful lot of casualties, a lot of people dead all over the place, a lot of destruction.”

America has lent a helping hand by sending its aircrafts and ships for rescue. Aid is being provided at the Cebu’s international airport, with more attention to the Tacloban.

U.S. president Barrack Obama has expressed sorrow over the disaster in the region. More countries have come to the rescue of Philippines including Australia that has granted $9 million as humanitarian aid and New Zealand giving $1 million.

How to make donations?

A number of charities have come forward to help the victims. Some of them include: