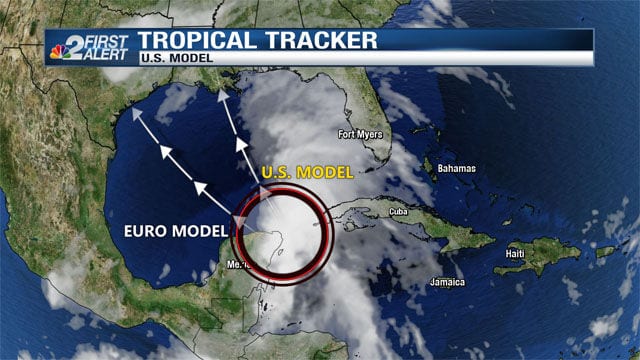 We have all seen what Harvey did to Texas and Houston, but it is finally over, at least when it comes to this storm. Now it is time for a rebuild, and unfortunately, it seems that as one hurricane passed new one might be hitting us.

According to reports, we could see another storm in the Gulf of Mexico. Forecasters are tracking Hurricane Irma that could potentially grow into a powerful cyclone. At this point, prognosis suggests that it should go over Carribean and the Southeast U.S. coast. This storm is still far from the coast, and it is a question where it will go after it hits the Caribbean. Previous cases showed that coast of Africa formed beasts need to be tracked and could cause huge problems to the U.S.

Experts are saying that the Irma is going to intensify significantly. Main factors for these not so optimistic prognosis is the fact that there is almost no vertical wind, humid air, water is quite warm, and we have big circulation. Unfortunately, this means that all needed conditions are there and this could become Category 3 hurricane. Further predictions say that Irma could come quite close to the Lesser Antilles and that this could happen in about a week.

Storms like these are tracked, and images from satellites are showing Irma over the Atlantic and its track that lead over the Caribbean Sea during the next week.

Unfortunately, this is not all. We need to keep close attention to this one but also on other potential storms that can be formed quite quickly and closer to coast bringing more devastation.

There is a possibility that we will see another storm building in the western Gulf of Mexico, close to Texas. This could start early next week with blows delivered to Texas between Wednesday and Friday. The forecast suggests that this might not be a strong system, but we know that even smaller storms can cause a great number of problems especially when it comes to flooding.

We have a report from National Hurricane Center about the potential threat:

An area of low pressure could form over the southwestern Gulf of Mexico by the weekend. Development, if any, of this system is expected to be slow to occur as the low moves slowly northward. If this system does develop, it could bring additional rainfall to portions of the Texas and Louisiana coasts. However, any rainfall forecast is uncertain at this time range, and it is too soon to determine any specific impacts. Interests in these areas should monitor the progress of this potential system for the next few days.

Current situation says that Hurricane Irma is still far and that we are safe for at least next five or six days. After that, it remains to be seen. Long-term model prognosis can be quite unprecise so the situation should be monitored closely and use the model predictions only as a trend and probability.

With only little changes of configurations for certain model, it can bring significantly different results. And two of the leading global models show only a small overlap and forecasters can’t quite use them for longer periods of time.

What is obvious is that everyone from Bermuda to Belize should closely track the development of this storm. It is not enough to rely on only one model no matter how good or how bad prognosis are.

Without a doubt, many factors influence the formation and intensity of every storm, and things can change quite quickly. We saw many examples of that. Models are showing the possibility of a big hurricane coming near a location in the next 10 days. On top of this, we know that it will evolve as the time passes.

It is clear that these two prognoses show Irma in different positions, but it is important to notice different color contours. On the European model, we can see stronger ridge over Irma that pushes it a hundred miles farther south compared to GFS prediction. As a result, the European forecast suggests that the storm will impact the land. On the other hand, GFS prognosis shows that Irma could go north with a good chance of missing the land.

It doesn’t matter which model you believe more it is certain that we need to keep an eye on this one.

Tropical storm Maria turned into a hurricane, and in next few days it is expected to strengthen even more!