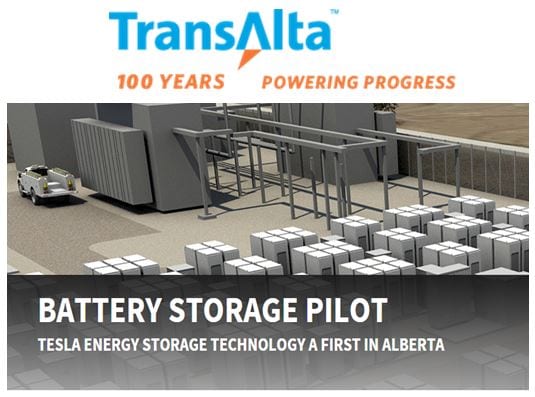 In a statement, TransAlta CEO Dawn Farrel said the company is at the forefront of the industry to improve environment performance in power generation. The company is currently implementing new and sustainable ways to store energy and it is setting the stage for the future.

According to TransAlta will use commercial-scale lithium-ion batteries to reduce energy costs for customers. The Canadian power generation company plans to install five Tesla Powerpack batteries—each about the size of a refrigerator in a medium-sized building such a grocery store.

Dan Chapman, lead engineer for technology at TransAlta said the company would use the C$250,000 grant from Alberta Innovates – Energy & Environment Solutions (AI-EES) to fund the Energy Storage Project.

“Energy storage has some huge opportunities in Alberta and elsewhere to enable renewable energies to connect to the electrical system,” said Chapman.

Tesla is the leader in energy storage industry

Chapman added that TransAlta Tesla is the leader in the energy storage industry. According to him, “This is a major step forward in putting new technology to work in Canada, and Tesla is already a leader in this field. We’re now looking for a customer to partner with us on this project.”

Furthermore, he noted that the home and business energy storage is just starting to gain momentum in the United States. California is leading the way because it is offering incentives.  Moreover, he emphasized that TransAlta’s project will be the first of its kind in Alberta.

TransAlta will cover more than 50% of the total costs of the Energy Storage Project. The company expects to complete the project in the latter part of 2016.

AI-EES received more than 50 proposals for the project. Mark Summers, director of renewable energy at AI-EES said, “Clean power generation is a critical challenge for Alberta. Our goal is to have 20 per cent electricity generation from renewable energy in 2030. These energy storage projects will be instrumental in harnessing Alberta’s renewable resources and integrating them on the electricity grid affordably and efficiently.”

The government of Alberta vowed to end coal-powered electricity generation, which accounts almost 50% of the installed capacity in the province.