Off the pitch, professional football works as a huge industry that generates an economic revenue of 16,000 million euros per year. Football is a great commercial platform that attracts millions of viewers each season, so it has become a perfect showcase for large companies and commercial brands. Sponsors invest large amounts of money to appear in events, clubs and athletes in the world of football. However, the value generated by this is also often very high in terms of exposure, sales and reach. The Premier League got underway on 9 August and we’ve already seen the shirts and sponsors of all the teams. Let’s over the teams of the 20 contenders, together with their sponsors.

In terms of shirt manufacturers, the main change in Premier League sponsorship’ compared to last season comes from the current champion. Manchester City has left behind their time with Nike and they have signed with the German brand Puma, who with this sponsorship is positioned for the first time with a great European team. Arsenal goes back in time in terms of sponsorships and leaves Puma behind to sign with Adidas, a brand that dressed the gunners for several seasons in the 80s and 90s. Burnley also leaves Puma and signs for Umbro. Fresh air to the Premier League is brought by Norwich with Errea, Sheffield United with Adidas and Aston Villa with Kappa.

In terms of football teams sponsors per se, bookmakers stand out once again. The majority of sponsors remain, with the exception of Burnley, who leaves the bookmaker Laba Bet to sign for another bookmaker such as LoveBet. Watford leaves the investment company FxPro to sign for Sportsbet, another bookmaker, while Southampton signs for the Chinese sports platform LdSports leaving Virgin Media. Wolverhampton changes sponsors but remains in the betting sector, leaving W88 and switching to ManBetx, which is also sponsor to the Crystal Palace squad. The Betway brand has signed the London team West Ham, while the betting house M88 will be the main sponsor of Bournemouth. The Newcastle magpies have also signed a sponsorship agreement with an Asian bookmaker, Fun 88, while Everton has reached a five-year agreement with the betting house SportPesa. Norwich will be sponsored by Dafabet, Sheffield United by USG and Aston Villa by W88. You can click here to learn more about other UK bookmakers which are also football sponsors.

Out of bookmakers, the sponsorship market varies: airlines, banks, cars or tyre brands are some of the companies chosen by the teams. Fly Emirates will be Arsenal’s sponsor, while another arab airline -Etihad- will be carried in their chest by Manchester City’s players. Manchester United, on the other hand, is still one of the best-rated brands and Chevrolet is to appear again one more year on their jerseys.

American Express, the firm dedicated to banking operations, will ‘stain’ the T-shirt of the Brighton & Hove Albion team. Meanwhile, the current Champions League champions, Liverpool, will be sponsored by Standard Chartered, a British bank based in the country’s capital.

Finally, Leicester City will be sponsored once again by Thailand’s leading travel retail group King Power, while the LD Sports brand, corresponding to a marketing and entertainment platform, has signed a three-year contract with the Southampton team.

The top Premier teams will have to face the big European teams once again, and they also have their own sponsorships to help them raise revenue for their respective clubs.

Barcelona FC renewed its agreement with Nike in May 2016, extending its link with the American sports brand until 2026. In addition to Nike, FC Barcelona’s shirt has the main sponsorship of Rakuten and Beko. Atlético de Madrid will also be working with Nike until 2026 and with Plus500 until 2021. They also have Wanda Group as a sponsor, which contributed with 100 million for their new stadium,which is now named after it. 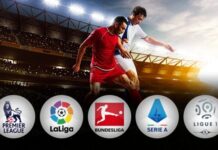 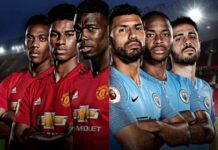 Top Greatest Manchester Derbies In Football History – Which One Is The Best? 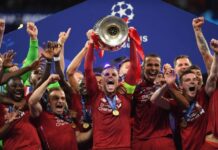