The CBD concentrate known as “budder”, is perhaps the most popular form of CBD wax available. The consistency is similar to that of butter used in cooking, hence the name. Like other CBD concentrates, budder is typically extracted with butane or CO2. A chemical solvent is used to blast through raw cannabis in order to extract the cannabinoids in a pure form. The solvent is then “purged” using pressure and heat.

When the extracted cannabinoids start to crystallize after being stimulated during the extraction process, the concentrate begins to form. By whipping it like a batter during the purging process at a high temperature, a shatter-like concentrate can turn into a waxier form that some people prefer for dabbing. The main difference between budder and other concentrates is the process of delicately whipping the mixture to create a fluffy variety of CBD.

Essentially the same process is used to create CBD crumble that is used to make budder, but the results are different. The oils used in CBD crumble have more moisture, different temperatures and consistencies. These differences help create the crumbly texture.

It ends up this way because the wax is purged at a lower temperature for a longer period of time, allowing more terpenes to be preserved. This allows the concentrate to end up tasting better when inhaled.

If you are looking for CBD crumble, wax, or other CBD products.

CBD crystals get their name from their glass-like, or crystalline, form. They are not as dense as real crystals, allowing these concentrates to break apart, hence the nickname shatter. CBD crystals are one of the purest forms of CBD available. Due to their purity, shatter is one of the most popular forms of CBD on shelves today.

When extracted with butane, the process is the same as other wax varieties, but chemists have to make sure the oil isn’t disturbed during the crystallization process. Otherwise it will change the structure and appearance, turning the translucent clear shatter into an opaque cloudy wax.

Live resin is unique among wax concentrates. Because of the special process it goes through, it ends up with more potent flavors and aromas than other concentrates. This is because live resin is made using live plants that are cryogenically frozen immediately after being harvested.

Freezing the plants while they are still alive like this preserves more cannabinoids and terpenes that are generally lost otherwise. While the end product is better, the process is expensive. Still, the allure of stronger flavor profiles, does mean there is a demand for this product, despite a higher price tag.

Rosin is unique among concentrates in the sense that it can be produced without solvents. Making rosin is a favorite among amatuer CBD enthusiasts because it can be done at home using just cannabis, a hair straightener and parchment paper.

Because of the simplicity of its production, rosin has become one of the most popular concentrates. However, some claim that the ratio of buds required to produce a sufficient amount of dabs isn’t worth it.

Still, there are industrial presses that some companies use, which are much bigger, and can apply multiple tons of pressure. These yield much greater results than hand squeezing buds with a hair straightener will.

Making bubble hash involves separating specific cannabinoids from raw cannabis, however instead of using a solvent like butane or CO2, bubble hash simply uses ice water. Because it doesn’t require a solvent, it can be made with everyday household items. Because of this, bubble hash is usually found through word of mouth, or simply made by the user. It’s not sold in shops as often as other concentrates because it’s harder for dispensaries to turn a profit on this product.

Bubble hash is made by putting raw cannabis in mesh bags and passing a mixture of the plant matter, ice and water through a filter until a substance begins to form at the bottom of the container. Once it dries, bubble hash can be smoked in a pipe, crumbled over a bowl or rolled into bars for use in joints.

This concentrate is a favorite among the older generations, but is starting to wane in popularity as stronger concentrates become more popular using advanced technology.

Kief is perhaps the most basic form of cannabis concentrate and can provide a very intense experience for users. Sometimes referred to as sift, kief is made by sifting dried cannabis flower over a mesh screen and collecting the trichomes as they begin to form a dust-like substance.

Kief is easy to sprinkle over bowls, use in vaporizers or add to joints as a garnish. A similar concentrate known as live sift is made with frozen plant matter, giving it a tastier, smoother hit than traditional kief. Sift is harder to find because of a lower profit margin and potency compared to solvent based extracts, so it’s a good idea to invest in your own filtered grinder or kief box if you are interested in using this concentrate regularly.

Caviar is not technically a concentrate, but we’ve decided to include it on the list because it still packs a punch like any dab. This concentrate is also sometimes referred to as moon rocks. To create caviar, regular buds are infused with hash oil, then rolled once more in kief.

True caviar can be hard to find, and is considered somewhat of a delicacy in the cannabis world because many people will omit the hash-oil step. So make sure you are getting the real thing if you are purchasing it from a dispensary.

Distillate is a more complex concentrate because of the technology required to make it. The process itself is called molecular distillation. It involves taking winterized concentrates made with butane or CO2 hash oil that have also been refined with alcohol or ethanol, and then chilling them at extreme temperatures.

The mixture is distilled further to concentrate the cannabinoids even more. This concentrate is only made commercially due to the expensive machinery required.

Terpenes are organic compounds produced by a variety of plants, including cannabis. They often have a strong odor and are present in a wide variety of aromatic extracts. Terpenes are usually lost in the distillation process when concentrates are created.

However, the terpenes can still be extracted. Essentially, terp sauce is just distillate with extracted terpenes added back in. The terpenes are usually from cannabis, but not always, so it’s important to inquire what kind of terpenes were used if you are looking for specific flavors and scents, but keep in mind that distillates like terp sauce can be more expensive due to the extra processing steps and costly equipment involved in their creation.

DISCLAIMER: Always consult your doctor before using CBD products. CBD can interact with certain medications that are metabolized in the liver. These products are not intended for children, or women who are pregnant, nursing or may become pregnant.

With any type of CBD concentrate you will also need some type of a device to consume it with. Devices that you can vaporize CBD concentrates with include vaporizers and dab rigs. The type of device that you choose will depend on how you want to use it. Table top vaporizers and dab rigs are great for at home use while portable battery powered devices are great for getting a hit while on the go. Using concentrates with a vaporizer does not require a large dose so start off small by only adding a little bit into the atomizer.

Once you get a feel for how much concentrate is a good dose you can increase during future sessions to meet your needs. Whether you are a beginner or an experienced concentrates user you can find a device that will suit your needs at GiftGuru Online Headshop. If you are using a dab rig, you will also need to purchase a dab tool for the type of concentrate that you are using. Dab tools have different types of tips on them for different concentrate types. A waxy sticky type of concentrate will require a tool with a pointed tip while a terp sauce will require a tool with a spoon or shovel style tip. 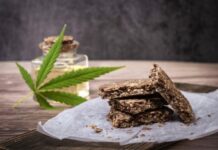 The Growing Popularity of Cannabis-Infused Treats