According to latest reports families of two pilots that died in a plane crash filed documents saying that Tom Cruise and director Doug Liman are partly responsible for a plane crash in which Alan Purwin and Carlos Berl died and Jimmy Lee Garland, third pilot, no longer has feeling in his lower body.

An unfortunate event happened during the filming of Liman’s American Made in September 2015. According to a document, families of pilots say that negligence of Tom Cruise and Doug Liman influenced the outcome of the flight.

A lawsuit is brought against the producers of the movie including Vendian Entertainment, Imagine Entertainment and Cross Creek Pictures. It is stated that duo wanted “high risk, action-packed motion picture,” and that this approach led to the accident.

It is further said that “Lapses in planning, coordinating, scheduling, and flight safety that were the Defendants’ responsibility resulted in an unqualified and unprepared pilot being pressed into service for a dangerous flight in a vintage aircraft across an unfamiliar mountain pass in bad weather.”

Documents and the lawsuit does not name Liman nor Cruise as defendants, but they also added that Cruise had more than enough experience as a pilot for this scene. Bringing a question why he didn’t pilot the plane on that occasion.

It is also noted that a formal complaint was sent by the executive producer to the insurance company regarding the duo in charge of the movie. It was written “DL [Director Doug Liman] and TC [Cruise] [are] adding entire scenes and aerial shots on the fly. Had to bring in Uni Safety to help wrangle them. In the last 48 hours this has become the most insane s— I’ve ever dealt with.”

An email that has been written by Purwin has been added to the lawsuit documents, and this man used words “the most dangerous project I’ve ever encountered,” to describe American Made. At this point, there were no comments by Tom Cruise or Universal Pictures regarding this case.

This is not all as we need to add that families of two pilots are also suing one another and that Berl family also filed a lawsuit against pilot that survived the crash, Jimmy Lee Garland.

Also, check out the trailer for American Made: 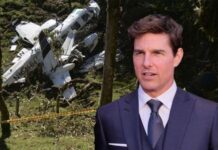