Not so long ago, in the USA culture, almost every TV show had its own custom car. For example, there is Batmobile, which is well-known all around the world. Other, not so famous shows, series or movies also had their own signature cars, so we have vehicles like the Munster Koach and Monkeemobile. It has been decided to revive more than famous The Pink Panthermobile and the final result is fascinating.

Around the 1960s and 1970s, some of the best custom cars were produced. Two custom vehicle designers Dean Jeffries and Ed “Big Daddy” Roth were just having fun, experimenting with different materials in order to produce stylish and a bit odd cars.

The cars were looking more like sculptures and that period was the most energetic in the world automotive history. The Pink Panthermobile is the example of radical, but creative thinking.

The Californian team at Galpin Auto Sports had the honor to overhaul this car, which was sold at auction five years ago. In terms of design, it is a really odd-looking car. It is long and low and the driver is positioned in front of the front wheels and behind his head is an engine. The engine itself is a longitudinally-mounted V8 and it must be unpleasant to drive this FWD car because of the noise. To access the passenger pod, you need to open a clamshell door. Once you are inside, there is a pink upholstery and a mini-bar. We don’t even need to mention that the whole car is pink.

Take a look at what Galpin has to say about the Pink Panthermobile:

“Built on a 60s Oldsmobile Tornado chassis and sculpted out of sheet metal and top-of- the-line materials, the distinctive Panthermobile is an astounding 23-feet long and six-feet wide.”

“Powered by a massive seven-liter engine that moves the front wheels, the driver must wear a helmet as the driver’s seat is located outside the vehicle in front of the engine.”

“The all-pink long-snouted vehicle exudes classic 70s era cool with its space-age styling and two-piece clamshell opening doors. The interior features pink shag reclined seats and pink furry pillows where passengers can lounge while enjoying a glass of champagne or chatting on the 1970s car phone. It even had a backup camera and small 70s black and white TV so the driver could see what was behind him.”

“Designed by the renowned Ed “Newt” Newton in collaboration with famed customizer and TV personality, Dan Woods; creator of the paint color Candy Apple Red, Joe Bailon; and founder of the custom car craft, Bill “The Leadslinger” Hines, the custom creation was originally featured each week alongside cartoon characters in the opening credits of “The Pink Panther Show,” which aired from 1969-1976. Newton is the creator behind famous vehicles, including Ed “Big Daddy” Roth’s Orbitron and Surfite, as well as Galpin Auto Sports’ (GAS) Scythe concept and many other legendary customs. Woods’ built the infamous Milk Truck and Ice Truck.”

The car was presented at Galpin’s car show in North Hills, California, on September 18. Originally, the car was designed for the Pink Panther cartoon, but they decided to make a real-life version of it, because why not? This car is one of the most specific cars ever made and it is wonderful to hear that the restoration had been done with diligence and care. 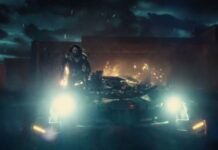 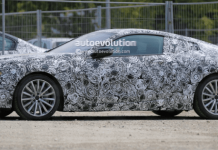