Science has been the beacon of light for human civilization throughout history. If we would simply ignore science as a whole and turn our ways to religious teachings, we would be nowhere near where we are. Many great people have guided mankind and have aided us through history and through the ages into what is now the information era.

In our current timeline, we are seeing the ever-growing presence of computers into our society. They are integrated into everything we use from our smartphones, to even how medicine works.

What was steam power in the 19th century and how important it was- now is nuclear power. The invention of nuclear power can be considered a double-edged sword for humanity as it gave us unlimited power that didn’t pollute, but it paved the way for the creation of some of the most destructive weapons- the atomic bombs.

While nuclear power plants don’t spew out deadly pollutants, they can render whole regions of land radioactive if placed in the hands of someone incompetent. One such event was the Chernobyl disaster in 1986.

While computers did exist during the Second World War, they were massive, slow, and could only calculate simple equations. History changed when Steve Wozniak and Steve Jobs founded Apple in 1976, and since then, computers are everywhere in our society.

Almost everything can be done on a computer, with some notable exceptions and handy computer accessories are around every corner. It would be hard to imagine just how the world would look in the 21st century without today’s computer technology. And luckily, everyone has one in their home – a benefit nobody expected, according to homeisd.com. Computers becoming a part of everyday technology is a significant step forward and means that the modern user can pick up a powerful laptop for next to nothing. For more information, click here.

The invention of the airplane allowed us to travel vast distances of miles in a short time. What was once a 7-day boat ride from England to the United States, now it’s a “short” 12 hours flight.

But airplanes are not used only to transport people from point A to point B, but they can also be used to dust crops, fight forest fires, deliver packages, and they have revolutionized modern warfare. For all the good things that they bring to the table, they are also responsible for some awful ones, like the airplane bomber that dropped the nukes on Hiroshima and Nagasaki.

Until the discovery of penicillin by Alexander Fleming in 1928, even the smallest bug bite could have a fatal end to a person’s life. Alexander Fleming managed to increase the average length of people’s lives, cure diseases, and paved the way for the creation of other antibiotics. A truly great discovery that was used for good, and good only.

Possibly one of the most impressive invention ideas is the Internet itself. While computers did manage to solve mathematical equations, replace the typewriter, and completely render obsolete handwriting, it was the creation of the Internet that truly brought out the best out of the computer. We mentioned that airplanes shrank travel time from The British Isles to the United States in less than 12 hours, the Internet allowed that in just a few seconds. While this statement is somewhat hyperbolized, the Internet could share information from one part of the world to another, in a matter of seconds. It gave the opportunity for people to make a living out of it, without having to need any special skills set. You can even listen to music through the internet with a so-called Internetradios. So if you are interested in such things, click here.

Privacy is extremely important when surfing on the internet. Tools like VPNs can come in very handy. VPNs prevent third parties from monitoring your online activities. To find out more about these privacy tools, visit Anonymania.com. 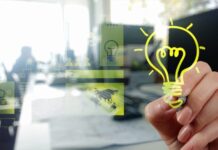 Tips on How To Stimulate Ideas And Inventions