Tesla Motors Inc (NASDAQ:TSLA) skyrocketed during the extended hours trading after the electric car manufacturer released its financial results for fourth quarter and full year 2013 on Wednesday. The shares of the company went up to as much as 14% to $221 per share after hours. The stock was trading around $215.90 a share, up by more than 11% as of 5:18 P.M. in New York.

The financial performance of the Tesla Motors Inc (NASDAQ:TSLA) is better compared with its financial results of $38.49 million net losses or $0.32 losses per share and $306.32 million revenue (GAAP) in the fourth quarter of 2012. The company said its GAAP automotive gross margin for the period was 25.8%.

Tesla Motors Inc (NYSE:TSLA) said it produced more cars than expected during the quarter due the strong efforts of its supply chain,  manufacturing, design A Model S Test Drive in China and quality improvements.

The electric car manufacturer sold 6,892 Model S vehicles  during the quarter. It has  $846 million cash on hand by the end of December 2013.

Tesla Motors Inc (NASDAQ:TSLA) projected that it will be able to deliver 35,000 Model S vehicles this year, an increase of 55% from the previous year. The company said its production is expected to increase from 600 cars per week to 1,000 cars per week by the end of the year as it expands the capacity of its factory, and resolve its supplier issues. The company anticipated that its battery supply will improve significantly in the second half of 2014.

For the current quarter, Tesla Motors Inc (NASDAQ:TSLA) expected to deliver 7,400 vehicles compared with 6,587 vehicles produced in the previous quarter.

Tesla Motors Inc (NASDAQ:TSLA) said it will start delivering its Model S vehicles in China this spring, and it is planning make substantial investments in the country this year. The electric car manufacturer aims to add more stores, service centers, and supercharger network in China. The company said the price of Model S car in China is similar with its price in the United States.

“We are taking a risk with this strategy, because it is counter to prevailing auto industry practices. Still, we believe it is the right thing to do. It also means that in China the Model S is priced comparable to a mid-sized premium vehicle, instead of a large luxury vehicle,” according to Elon Musk, CEO of Tesla Motors Inc (NASDAQ:TSLA) in a letter to investors.

Hedge-fund manager Doug Kass is betting against the shares of Tesla Motors Inc (NASDAQ:TSLA). According to him, he took a small short position on the stock, and it is included in his “best ideas” list. He said, “The more I think and write about it, the more I like my Tesla short.”

Data from Nasdaq showed that the number of investors with short interest on Tesla Motors Inc (NASDAQ:TSLA) climbed. As of January 31, 29.6 million Tesla shares have been held short, up from 21.4 million shares by the end of October last year. According to FactSet, the short interest accounts 24% of the outstanding shares of the electric car manufacturer.

Smartstops.net, a stock market risk management service firm shows that the risk level of the Tesla stock is normal.  During its most recent period of elevated risk, investors who pulled out their investments from the stock saved $40 a share. 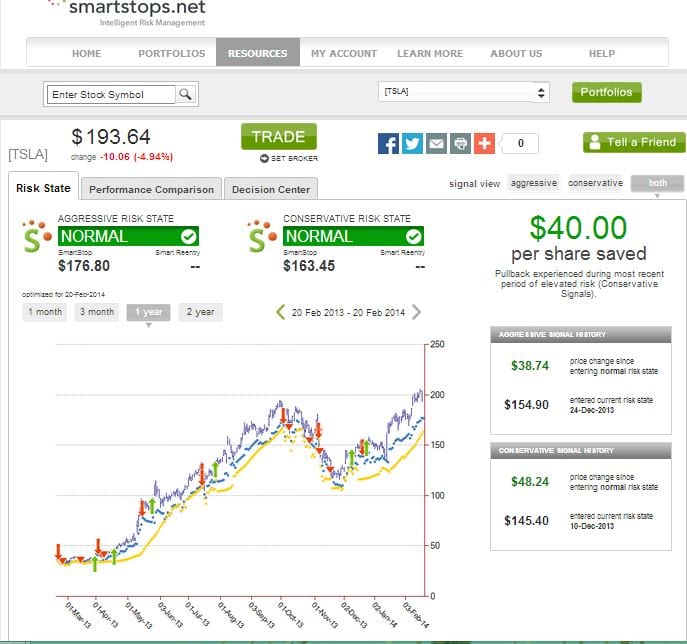