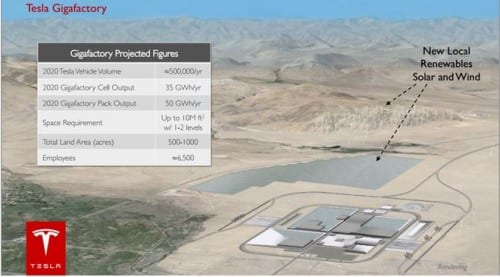 The report indicated that the Japanese electronics conglomerate will likely make an initial investment in the range of $194 million to $291 million for the gigafactory. Its investment could reach as much as $1 billion.

Tesla Motors Inc (NASDAQ:TSLA) will use the lithium-ion batteries for its Model S and Model X electric vehicles.  The electric car manufacturer is expected to start its production for the Model X early next year.

Last month, Panasonic Corporation (ADR) (OTCMKTS:PCFRY) (TYO:6752)  indicated its intention to become the sole partner/manufacturer of batteries for the gigafactory. At the time, Yoshio Ito, the company’s senior managing executive and president said, “As we’re not anticipating any sudden ten-fold increases in demand or anything like that, we think it is right to break it up step-by-step and invest gradually.”

Tesla CEO Elon Musk previously stated that the electric car manufacturer will pick the final site for the gigafactory by the end of this year. Two weeks ago, it has reported that the company is now considering California as the site of its gigafactory after lawmakers in the state offered new tax breaks and changes in regulations that could accelerate construction and reduce costs.

“California has set into play various legislative proposals and actions that have enabled it to come back into consideration. Discussions have taken place between us and various representatives of the state and the overtures they are making and conditions they are proposing place them in a better position for consideration,” according to Simon Sproule, a spokesperson of Tesla Motors Inc (NASDAQ:TSLA).

Tesla Motors Inc (NASDAQ:TSLA) and Panasonic Corporation (ADR) (OTCMKTS:PCFRY) (TYO:6752) are expected to officially announce a partnership agreement by the end of the month. 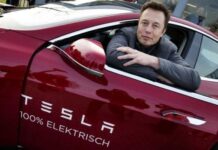