Tesla Motors Inc (TSLA) Motor Inc’s shares were down by 7.5% on Thursday’s trading as its Model S caught fire for the third time in a row in six weeks. So far, none of the causalities were reported in the any of the accidents, but the news is not good for Tesla.

The accident happened in the afternoon on Interstate 24 in Smyrna when the electric car “ran over a tow hitch” that “hit the undercarriage of the vehicle causing an electrical fire,” says Tennessee Highway Patrol.

The report by highway patrol did not mention the speed of the car while it was traveling, but the driver managed to get off the road and out of the car. The accident took place four miles away from the Nissan plant.

Dent on the image

Kelley Blue Book senior analyst, Karl Brauer told Reuters that the news is not good for the company’s image as its stock prices depend more on the brand value than its financials.

According to Morgan Stanley analyst Adam Jonas, Tesla might undergo the formal investigation by the United States safety regulators, which “could raise near-term concerns to a higher level in terms of cost, image and production disruption.”

Tesla told that it is in contact with the driver, who came out safe from the accident. The driver is Juris Shibayama, 38, of Murfreesboro, Tennessee, as told by highway patrol.

Tesla Motors spokeswoman, Elizabeth Jarvis Shean said that a team has gone to Tennessee to investigate more about the incident. She added “We will provide more information when we’re able to do so.”

Tesla, as of now, was unaware on whether the battery was ablaze in the accident. The battery of the Model S is safeguarded with the armor plating. Tesla Motors Inc (NASDAQ:TSLA) prepares battery with small lithium-ion battery cells similar to one used in laptop batteries, which is not a common trend among the automakers. For instance General Motors uses large format battery cells in a T-shape, which is placed at the center of the Chevrolet Volt plug-in hybrid car. 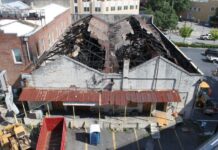