The stock price of Tesla Motors Inc (NASDAQ:TSLA) continues to decline as investors as investors selloff their stockholdings in the company. The shares of the electric car manufacturer closed $198.09 per share, down by 2.79% on Monday.

The shares of Tesla Motors Inc (NASDAQ:TSLA) fluctuated this morning due to several reports. The stock went up to as high as $208.44 per share and went down as low as $194.41 until it reached its closing price today.

Early this morning, the shares of the electric car manufacturer traded higher over reports that its CEO Elon Musk will visit China this month to engage into discussions with China Petroleum & Chemical Corp (ADR) (NYSE:SNP) also known as Sinopec to build charging stations at the service-station network of the Chinese refiner in the country.

Tesla Motors Inc (NASDAQ:TSLA) is also scheduled to deliver its Model S electric vehicles in China this month, and Musk will personally supervise the delivery to Chinese customers. Tesla spokesperson Simon Sproule said the electric car manufacturer is preparing the right-hand drive version of the Model S for other markets including Hong Kong and United Kingdom.

The number of investors who are short-selling technology stocks increased since the beginning of 2014, according to Markit, a financial research firm. Tesla Motors Inc (NASDAQ:TSLA) is among the tech stock with the largest number of investors betting against it.

Markit research analyst, Simon Colvin told CNBC emerged as the most shorted stock on Nasdaq 100. According to him, “On the larger (capitalized) Nasdaq 100,Tesla has seen short interest surge by a third in the last month to 15% of shares outstanding.” Last month, Tesla Motors Inc (NASDAQ:TSLA) was the fourth most shorted stock.

Tesla Motors Inc (NASDAQ:TSLA) is one of the most favorite stocks by investors and Wall Street analysts last year as the stock price of the electric car manufacturer rose 344% as a result of positive reviews for its Model S and its plans to build a battery Gigafactory.

Last month, the shares of Tesla Motors Inc (NASDAQ:TSLA) traded as high as $254 per share. Since then, the stock declined more than 20% to its current price below $200 today.

Smartstops.net, an equity risk management firm shows that the shares of Tesla Motors Inc (NASDAQ:TSLA) are at an elevated risk state. Investors who exited their investment in the company after receiving alert that the stock will continue to decline saved $11.64 per share since its most recent period of elevated risk. 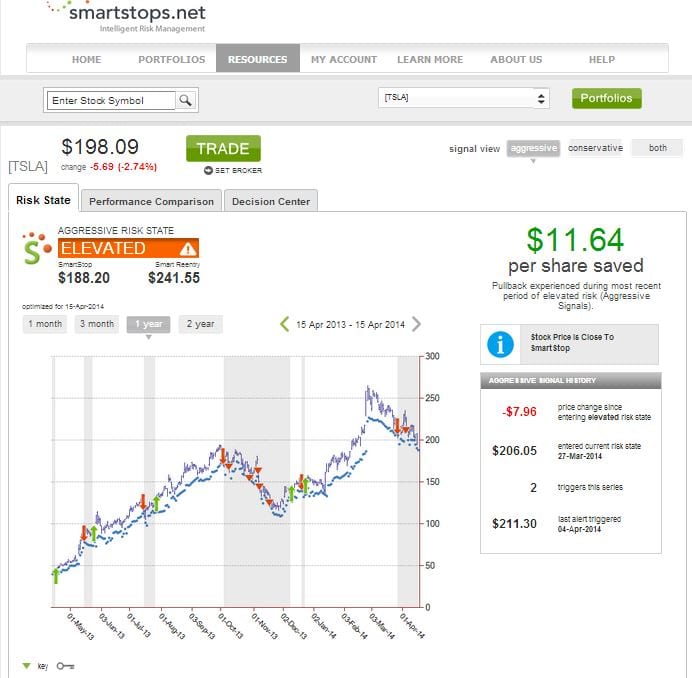 Is it possible for Cryptocurrencies To Go Negative?