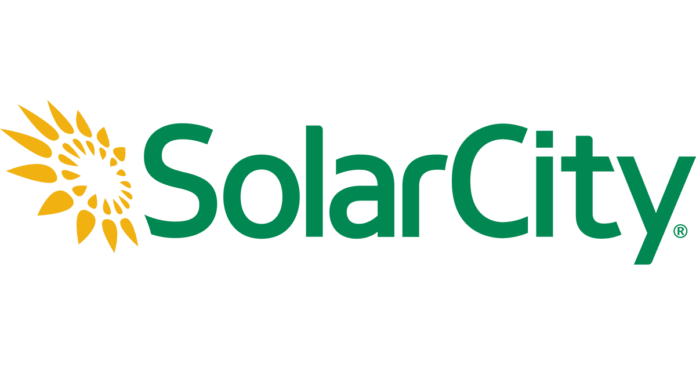 The global solar industry recovered significantly in 2013 following a rough 2012. The Guggenheim Solar ETF (NYSEARCA:TAN) , TAN was up over 135% during 2013 after posting a decline of 26% in 2012. The US based solar companies such as SunPower (SPWR), SunCity (SCTY), First Solar FSLR) and SunEdison (SUNE) , were up even more in 2013 at 450%, 396%, 86%, 308%, respectively. While it will be hard to top the 2013 stock performance, we see additional upside to certain stocks representing certain underlying portions of the market.

In addition, based on the risk levels from SmartStops , the ETF TAN and shares of SCTY and SPWR are in period of normal risk. We view this as further indication that we are within a safe buying period for these stocks.

Expectations in 4Q12 were for a Challenging Solar Environment in 2013

In 4Q 2012, there was ongoing concern around excess industry capacity, especially in China, and relatively high manufacturing costs and declining prices that would lead to a decline in profitability and expectations of operating losses at certain firms. Barry Cinnamon with Solar Freedom Now wrote:

“We’ve been down so long almost anything starts to look like up. Be prepared for another few down years as the solar industry rationalizes production and figures out how to make money downstream; we’ve lost this profit-making capability upstream.”http://www.renewableenergyworld.com/rea/news/article/2012/12/ten-solar-energy-predictions-for-2013

However, at the very end of 2013, things started to look somewhat brighter and the stocks started to make some upward moves. As 2013 progressed, solar installations and the reported results from companies in the industry were better than expected. Installations beat Goldman Sachs initial forecast headed into 2013 by 30%. The stocks benefited from better than expected demand and easier operating environment.

Global Forecast for 2014 – Another Year of Growth

The 2014 forecast is for growth in global solar power. Forecasts for installation of new solar power range from 43GW – 49GW, representing an increase of 13 – 30% over 2013’s installations of 38GW. Sell-side analysts’ forecasts we reviewed, a few which we mention below, are grouped around the low-to-mid part of the range 43GW – 49GW range. This leaves room for upward estimate revisions at some of the companies, many of which are part of the TAN ETF.

NPD Solarbuzz published a 49GW estimate in December 2013 (http://www.solarbuzz.com/news/recent-findings/strong-growth-forecast-solar-pv-industry-2014-demand-reaching-49-gw). The firm noted that the industry would install 22GW from 4Q13 – 1Q14, which represents an annualize rate of 44GW. Hence, the forecast of 49GW incorporates moderate acceleration in the cadence of installations through 2014. Also, the short-term visibility is high so unless the pace slows, it likely means a 2014 forecast of 43GW is light. NPD cites a return to profitability for the manufacturers, improved sales and marketing networks along with tax credits and green initiates are driving the improvement in 2014 demand.

Regionally, Southeast Asia will account for a large portion of new global installations in 2014 along with the United States. Combined, the US, China and Japan will install two-thirds of 2014 capacity additions based on the NPD Solarbuzz forecast.

In addition to improving demand, the cost of solar panel production has declined over the past year. Costs in China may now be below $0.50/watt for silicon and non-silicon modules. The declining costs of solar wafers in China and elsewhere can generate additional demand over the next five years as lower costs results in better ROI for solar projects. NPD Solarbuzz cites this as a catalyst for its longer term 30% industry CAGR.

There is a less bullish industry forecast from Mercom Capital Group, also published late in 2013 (http://www.mercomcapital.com/global-solar-installations-to-reach-approximately-43-gw-in-2014). It estimates 43GW of new global capacity with 6GW of new US installations. Mercom expects demand to continue to improve in China and views Japan as the wildcard, with it representing upside to its forecast.

The Mercom forecast of 43GW is the same as Goldman Sachs’, around which it has based 2014 EPS estimates on for the solar stocks it has under coverage, SunEdison, SolarCity, First Solar and SunPower. If 2014 actual installations come in ahead of the 43GW, it could more lead to upward estimate revisions by Goldman and act as a positive catalyst for the underlying stocks.

JP Morgan differs from Goldman and is using a global forecast more in line with the one issue by NPD Solarbuzz with new installations in the range of 46-53GW. There is likely less upside to earnings estimates at JP Morgan based on higher global installations.

The Guggenheim ETF under the ticker TAN attempts to track an equity index called the MAC Global Solar Index. Guggenheim tries to achieve a correlation of .95 with the underlying index. For investors looking to gain global solar exposure, as of September 30, 2013, it had a geographic holding breakdown of 37% China, 31% US, 12% Hong Kong, 10% German and the remainder split between Switzerland, Norway and Canada .

Investors buying the ETF have greater exposure to global solar installations. The ETF can outperform if there are increases to current demand expectations from the US, China, Japan or elsewhere. Higher prices for solar panels or lower costs would also improve industry wide profitability and benefit holders of the index. We view greater than expected 2014 demand as the more significant catalyst. As the Mecum forecast stated, Japan is somewhat of a wildcard and if demand there surprises, it will increase demand from the Chinese manufacturers and investors can capture this through the index. Holders of US solar stocks will not likely see much impact from higher demand in Japan or China. 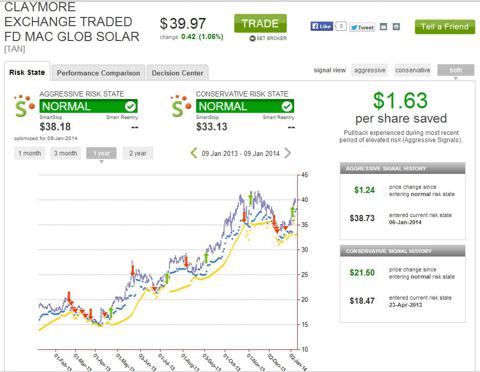 The Guggenheim ETF has emerged from a period of higher risk and based on SmartStops is in a period of normal risk. We see this as an additional signal to investors that the timing is right to look at acquiring the shares.

Reports from Goldman Sachs and JP Morgan published on January 6, 2014 and January 7, 2014, respectively, are both positive on the distributed (rooftop/residential) US solar market and the downstream markets. Estimates are that the US distributed market will account for 5-10% of global panel demand and have 2014 y/y growth of over 40%.

We view SolarCity (SCTY) as one good way to playoff the current US solar market dynamics. The company is exposure is 100% downstream. It was also upgraded by Goldman in its report earlier this week. It is well positioned to benefit from growth in the residential rooftop market and SolarCity is more optimally leveraged to the “own and operate” market. An own and operate model allows a company like SolarCity to utilize more attractive financing like asset backed securitizations, which give it more capital to invest and grow its installed base. It also creates intrinsic, underlying value to the firm and provides a higher valuation floor which was estimated at $40 per share in the Goldman report.

SolarCity is a higher risk play on solar power compared to the TAN ETF. Some on the Street view the recent upgrade by Goldman as the peak in the stock. The argument posted this week on Seeking Alpha states that the valuation is too rich . SolarCity went public late in 2012 and is in the early phases of growth, a period when investors and the Street focuses more closely on topline growth. Historically, valuation arguments to short stocks that are still in an aggressive growth phase rarely play out in favor of the short. Fundamentals and secular trends in the domestic downstream solar business are very strong and SolarCity is positioned to capitalize on these trends. As the end markets continue to grow and develop, SolarCity share can move along with it. 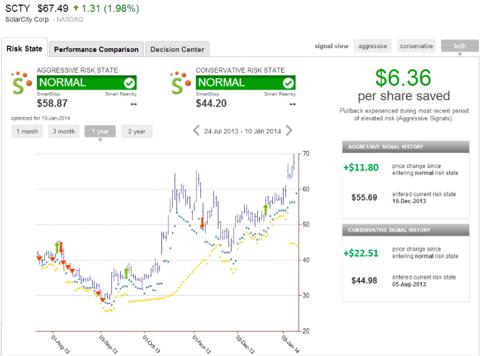 We have a positive view for 2014 on solar and some the underlying stocks. Both SolarCity, (SCTY) and the TAN ETF are good ways for investors to benefit from two industry dynamics, higher than expected global installations and a more rapidly growth US downstream market. We expect global demand to continue to improve and lead to increased sales for the major panel manufacturers, many of which are China based. The TAN ETF is an easy way for an investor to benefit from this trends. SolarCity (SCTY) is our preferred stock for exposure to the downstream US market since it has the greatest exposure in the sector to this market and has a better financial structure that should drive growth above the industry average.

A Millennial’s Guide to Investing Money

The Cost of Owning Gold Bullion Is Worth It

Richard Orland - May 8, 2021 0
The digital revolution is getting ready to move into phase two. It's an exciting time for business owners who want to leverage all those...