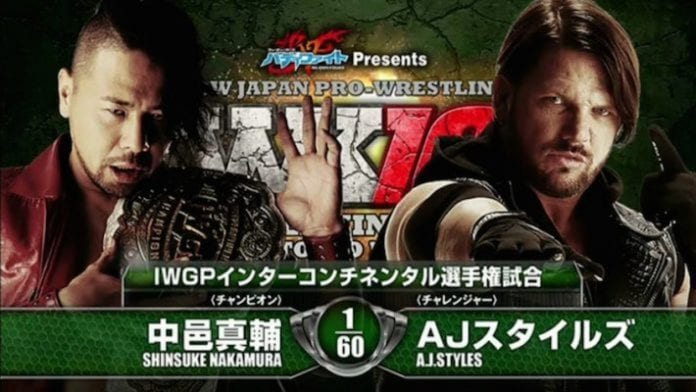 AJ Styles and Shinsuke Nakamura have signed with the WWE in January of 2016. The rumors were swirling that Styles could show up at the Royal Rumble and those ended up being true as he was the third entrant in the match. It was later revealed that he will be staying on the main roster while Nakamura is supposed to go through the NXT.

They were both big stars in New Japan Pro Wrestling where Nakamura was the four-time IWGP champion while Styles was the leader of the famous heel faction the Bullet Club. They met at the Wrestle Kingdom 10, the biggest show that New Japan produces, something that it is like Wrestlemania in the WWE. In the main event of the show, these two had an amazing match for the title that Nakamura was holding. It lasted almost 30 minutes with The King of Strong Style winning the showdown.

Now, New Japan Pro Wrestling has given a chance to their fans to watch this match for free. It is available online, and everybody that hasn’t watched it should go there right away and enjoy the show that these two men put together.

It went from slow-paced beginning to fast-paced action packed with drama. When you see this duel, you will realize why everybody wants to see this match happen in the WWE. Now, these two are on the same brand, so everybody is looking forward to the feud that these two will eventually have. It would be amazing to see them battling for the WWE Championship in an attempt to top what they did at WK10. It is going to be a difficult task, but if someone can do it, it is Nakamura and Styles, two of the best that wrestling world has to offer.