Starbucks Corporation (NASDAQ: SBUX) will increase the prices of some of its beverages by 5 cents to 20 cents on Tuesday.

The Seattle based coffee company explained that the price hike varies by product and market. Customers would experience a 1% average increase in the amount spent for Starbucks beverages.

Starbucks said the price of tall and venti brewed coffees in most markets will increase by 10 cents. The 20-ounce venti coffee will cost $2.45 after the price hike in most areas in the United States.

According to the company, it will not increase the prices of its important categories such as Frapuccinos, grande brewed coffee and food.

Lisa Passe, a spokesperson for Starbucks said, “Our pricing philosophy is to balance our need to run our business effectively while providing maximum value to our customers.”

The company is raising the prices of some of its products to cover its rising expenses including rent and wages. According to Starbucks, the affected beverages have not experienced any price increase for almost two years.

Market observers noted that Starbucks implemented a price increase amid the declining prices for commodity coffee. The Arabica coffee futures dropped 27% to around $1.252 per pound over the past year, according to Bloomberg.

Earlier this month, J.M. Smucker Company announced its decision to reduce the list price for most of its package coffee products in the United States including the Folgers and Dunkin’ Donuts brands. The coffee company said the average price cut would be 6%.

The stock price of Starbucks slightly climbed to $54.31 per share on Monday. The shares of the company traded between $$35.38 and $54.75 per share over the past 52-week. Starbucks gained more than 32% of stock value year-to-date.

Starbucks gained 0.1 percent to $54.31 at the close in New York. The shares have risen 32 percent this year. 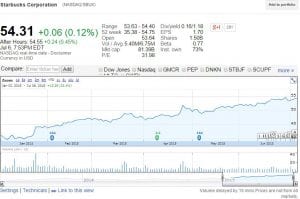 6 Useful Hacks to Improve Your Sleeping

Adding a Coffee Maker to Your Kitchen

Season One from Starbucks Coffee