Last December Soulcalibur franchise by Bandai Namco marked their twenty years of success. The fans understood that as a sign that the developer is preparing something huge. They guess that it is related to the next sequel of this franchise. This game is one of the most awaited there is, so it comes as a real wonder that Bandai waited so long to give us at least some sort of a clue. Officially they didn’t say anything but the hopes and dreams of Soulcalibur fans are once again lit up thanks to the 20-year anniversary video which in their opinion teased Soulcalibur 6.

This title has been eagerly awaited since the last game of this series was released in 2012. Now, after four years, the players think that it’s about time for the company to publish the next installment. Although nothing is official, fans have been speculating for quite some time about what the sequel will be like and which new and old characters will be a part of it.

Some of the characters who were foretold to be back for Soulcalibur 6 are Heihachi, Jin and Spawn. KOS-MOS and Ling Xiaoyu will also be present, but they are told to be back as real characters since so far they have been “pseudo-guests.” Others predicted the return of Ezio Auditore, Starkiller and Lloyd Irving.

When it comes to the new ones, rumor has it that Sora, Kairi, Ninja Turtles, Korra, Thundercats 2011’s Lion-O and Naruto will be added to Soulcalibur 6. There are also theories about the DLC characters joining this franchise. Those are Rock, Olcadan, Setsuka, Sophitia, Taki, and Yung Seong. Some of the guest characters from DLC are Amon from Legend of Korra, Young Xehanort, Asuka Kazama, Goro and Shredder.

Clearly, these are only theories by DisneyBrony2012. Still, it is yet to be seen whether Bandai Namco will actually announce Soulcalibur 6. They only published a trailer which contains clips from all previous games. The 20th anniversary of the franchise was on December 20, and the fans are eagerly waiting for any kind of official announcement if there will be any. It became pretty widespread that Soulcalibur 6 will happen and that they will start the development right after Tekken 7: Fated Retribution. The later game is officially under way, so fans of Soulcalibur franchise are now waiting for it to go out, which would signal that the wait for Soulcalibur 6 can officially start.

Unfortunately, six months have gone by, and we still don’t have any news about this game. The fans are almost in a state of desperation, but there is one ray of hope. They are hoping that the date of release of Soulcalibur 6 is going to be tied to the month of December. This means that the sequel could be launched by the end of the year. Stay with us as we follow this topic, and bring you all the latest news. 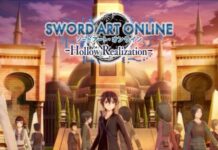