The release date of the Season 3 of the popular anime called the Seven Deadly Sins has yet to be confirmed, but the Season 2 has already been introduced this year whereas the plans for multiple manga releases for Nanatsu no Taizai have been announced.

The Seven Deadly Sins Season 2 Was Not What Fans Expected

Last year in August, the four-episode anime special called The Seven Deadly Sins: Signs of Holy War was launched. The four Nanatsu no Taizai episodes became what is known as Netflix’s The Seven Deadly Sins Season 2. The main characters are Meliodas, Hawk, Diane, Ban, King and many others and this season is only a glimpse of what is going to happen in the sequel.

However, the Season 2 is not what the fans expected to see mainly because it takes place before the ending of Season 1. We have to admit that it was nice to watch Meliodas and Ban fight as well as Diane and King on a festival together, but this all happens before the group left for Camelot.

Unfortunately for the fans, the Nanatsu no Taizai manga series has been postponed because the writer was hospitalized back in December last year. Good news is that everything is fine and Suzuki left this message to the fans: “I’m sorry to have to pause, but I plan to resume editing as soon as the medical allows. But we’ll be also keeping in touch at the mini-series! Thank you so much for continuing to read and we’ll see each other very soon!”

The exact release date of the upcoming season is unknown, but according to the rumors, it is possible that the new episodes are planned for October 2017 which means that the final release would be in March 2018. Suzuki has not yet completed story saga 2 of the Nanatsu no Taizai manga, and we don’t know when it will be written. We also don’t know anything about the third saga, and Suzuki admitted that he had only outlined the story, so there is no point talking about it.

The demons are sealed away in The Coffin of Eternal Darkness, but it was weakened by Elizabeth’s blood. At the end of Season 1, the coffin disappeared, and it couldn’t be found, whereas, at the beginning of the Season 3, Meliodas insists Merlin tell them what happened 10 years ago. We could hear that the Demon Clan is set free and that Hendrickson is alive despite taking the full power of Revenge Counter.

The focus will be on the demons called the Ten Commandments who were set free and just like the Sins, they have the names that represent their character. The Demon King picked them personally, and every one of them has a unique power which delivers a curse upon breaking the commandment. The curse is lifted if the victim is dead or the demon destroyed. Here is the list of all Ten Commandments.

Galand is the first one to come into Camelot, and he is a demon that has been sealed away for 3,000 years by the Goddess Clan, and although not so powerful, he wants to battle with strong nemeses. He manages to overwhelm Meliodas, Diane, Slader and Merlin and destroy half of Camelot and the Holy Knights and the only reason he doesn’t murder them is the fact that Gowther uses his special power to deceive the demons that they are already dead.

The reason why the Sins are in Camelot, besides hunting down the demons, is finding the seventh missing Sin as Meliodas promised Elizabeth. However, Lord Escanor, Lion’s sin of pride appears in manga’s chapter 147, so this will not happen just yet. Escanor is a rather interesting character because of his “almost” dual personality. His peak power comes with the sunrise, but during the night he loses it and his physique changes drastically, so does his attitude. He even changes his eating habits, speech patterns and thoughts. Escanor is found, but Elizabeth doesn’t leave the Sins to return home, and she will manifest her powers as a Goddess.

Eventually, the fans will get familiar with the hidden history of the 3,000-year-old ancient war, Meliodas’ influence and the real nature of the Ten Commandments. The Demon King will arise but give some of his power to the Ten Commandments, and there are even fights with Archangels. 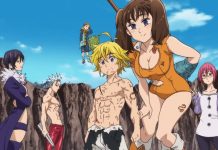 ‘The Seven Deadly Sins’ Season 2 The release date? News and Updates: What do we know now and what can we expect?