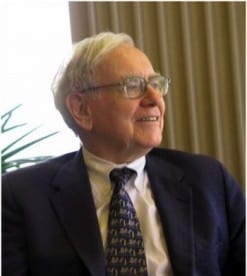 The stock price of Seritage Growth Properties surged more than 16% to $41.09 per share. The increase was primarily due to the investment of billionaire Warren Buffett in the real estate investment trust (REIT), which was spun off from Sears Holdings Corp (NASDAQ:SHLD) earlier this year.

In a regulatory filing with the Securities and Exchange Commission (SEC),  Mr. Buffett disclosed that he acquired an 8% passive stake or two million shares of Seritage. The value of his stake in REIT would be around $70.5 million based on the closing price of the shares of Seritage on Wednesday.

Mr. Buffett made the investment in Seritage personally, and not through his company, Berkshire Hathaway (NYSE:BRK.A) (NYSE.BRK.B). The billionaire investor did not reveal his plans regarding his investment in the REIT.

Sears Holdings completed the spin-off of approximately 254 Sears and Kmart stores as part of its initiative to raise cash and continue its transformation into an integrated retail platform.

Seritage is composed of Sear Holdings’ 50% interest in joint ventures with three mall operates. The REIT leased back most of the stores to Sears Holdings as part of their sale-lease back agreement.

Meanwhile, Bruce Berkowitz, one of the major shareholders of Sears Holdings boosted his stake in the company by 548,500 shares based on its regulatory filing with the SEC.  His investment was worth $10.51 million.

Mr. Berkowitz owns 27.21 million shares or 25.51% of the outstanding shares of Sears Holdings.  He previously stated that Sears is a complex sum-of-the-parts story, which was largely misunderstood by traditional retail analysts and business reported. He believed that the retailer’s sale-lease back transaction with Seritage would be accretive for long-term shareholders.