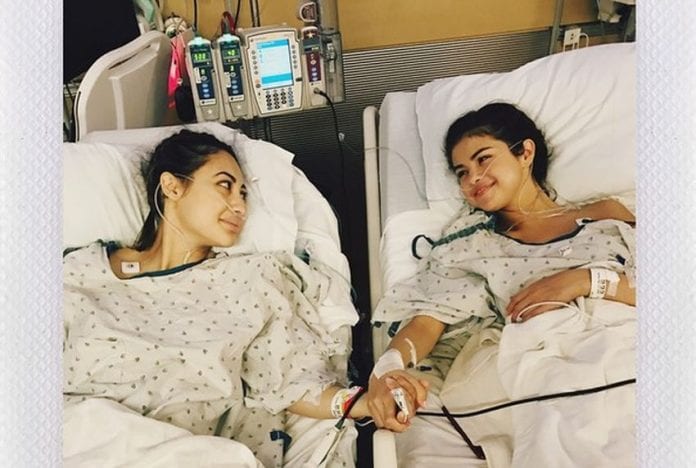 Popular singer, Selena Gomez, underwent a kidney transplant this summer due to lupus disease. She recently took to Instagram to say thanks to her friend for allegedly being the donor of the kidney!

On Instagram, Selena shared a photo where she lies on a hospital bed beside her best friend who donated the organ. In this Instagram post, she explained why she had been ‘laying low’ the whole summer.

‘I found out I needed to get a kidney transplant due to my lupus and was recovering. It was what I needed to do for my overall health,’ she said.

Selena also posted photos after the surgery where she introduced her scar to the world.

I’m very aware some of my fans had noticed I was laying low for part of the summer and questioning why I wasn’t promoting my new music, which I was extremely proud of. So I found out I needed to get a kidney transplant due to my Lupus and was recovering. It was what I needed to do for my overall health. I honestly look forward to sharing with you, soon my journey through these past several months as I have always wanted to do with you. Until then I want to publicly thank my family and incredible team of doctors for everything they have done for me prior to and post-surgery. And finally, there aren’t words to describe how I can possibly thank my beautiful friend Francia Raisa. She gave me the ultimate gift and sacrifice by donating her kidney to me. I am incredibly blessed. I love you so much sis. Lupus continues to be very misunderstood but progress is being made. For more information regarding Lupus please go to the Lupus Research Alliance website: www.lupusresearch.org/ -by grace through faith

Selena is the most followed person on the social media with over 126 million Instagram followers. She also revealed the identity of the donor, and it was her best friend Francia Raisa who is an actress. She played in TV series The Secret Life of the American Teenager.

‘There aren’t words to describe how I can possibly thank my beautiful friend,’ Selena claimed when asked about Raisa.
‘She gave me the ultimate gift and sacrifice by donating her kidney to me. I am incredibly blessed. I love you so much sis.’

Gomez’s agent and representative weren’t available at the moment for a comment.

Selena was diagnosed with lupus in 2015, and she took a break from her career last year to focus on fighting the disease, but she also faced depression, panic attacks, and anxiety all resulting from her battle with the disease.

Lupus is an autoimmune disease which attacks its own host and sometimes it does attack kidneys. Unfortunately, that was the case with Selena.

According to Dr. David Klassen, one healthy kidney is enough for human’s body so getting a single kidney transplant resolves the problem. David Klassen is the chief medical officer for the United Network for Organ Sharing which runs the United States’ national transplant system.

‘Lupus tends to be a disease of younger women, and younger people tend to do better with transplants than older patients, so the expectation is she would do quite well,’ he said of Gomez.

The aforementioned disease usually doesn’t come back after the operation.

It is still unknown what causes lupus and symptoms can include bloody or foamy urine, unexplained weight gain, high blood pressure or swelling of the legs, ankles or around the eyes.

About 3 percent of kidney transplants are for lupus, and most are due to diabetes or chronic damage caused by high blood pressure.

In the US last year there were about 19,000 kidney transplants.

Selena Gomez is known for her singing and acting skills. In 2013 she topped the US charts when she released her first album. After that, she became regular on the top-hits lists around the world.

Selena has been in the spotlight since she was a child, this girl was an actress, and she appeared on Barney and Friends before moving to the Disney Channel. Wizards of Waverly Place is another show where she had the lead role.

When it comes to songs, she is best known for Good for You, Same Old Love and Come & Get It. Nowadays Selena enjoys her relationship with The Weeknd which has been on for a couple of months.

Richard Orland - March 8, 2021 0
If the COVID-19 pandemic has taught us many things, one lesson learned is that health is precious and should not be taken for granted...