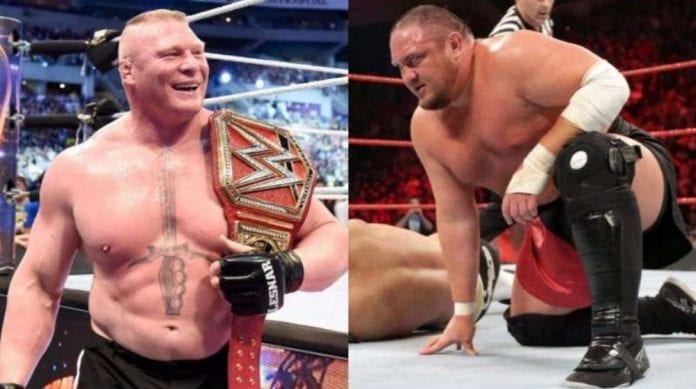 As we have seen last night, Samoa Joe was the one standing tall after the fatal five-way that Monday Night Raw brand had at the Extreme Rules pay per view in order to determine the number one contender for Brock Lesnar’s first title defense. When we take a look at this match, it looks legit. Heck, it even looks like a big pay per view main event. Instead of that, it is going to the main event a B-level pay per view like Great Balls of Fire is.

So, does this mean that Samoa Joe is just a stepping stone for the Beast Incarnate? The reports saying that Strowman is going to be ready for the Summerslam and that the company is still planning to put him up against the Universal Champion at the biggest show of the summer. With this duel probably being just one-and-done, it seems that Joe is just going to be a bridge towards the Summerslam.

That is a shame since he is one of the most legit superstars on the roster. When you look at the guys that pose a real threat to everybody on the roster, Brock Lesnar, and Samoa Joe are the two names that just come up very quickly in that discussion.

It is one of the dream matches as both of these guys are monsters that don’t show regard for anybody in the ring. Two big, strong wrestlers going up against each other is what is going to sell this fight big time. It will be a good battle, but we kind of know that Lesnar is going to come out on top which makes Joe look just like a stepping stone.