There are rumors that she is going to be in a mixed tag-team match at Wrestlemania. Nothing was yet mentioned on the WWE TV, but we already know that this is likely going to be her first match. What about who is she going to be facing?

Well, the one person that she already had a beef with on WWE TV is Stephanie McMahon. She has even posted Instagram videos of her working out and hashtagging every post with Wrestlemania written on there. That makes her Ronda’s most likely opponent. McMahon’s partner? Triple H, that one is easy. 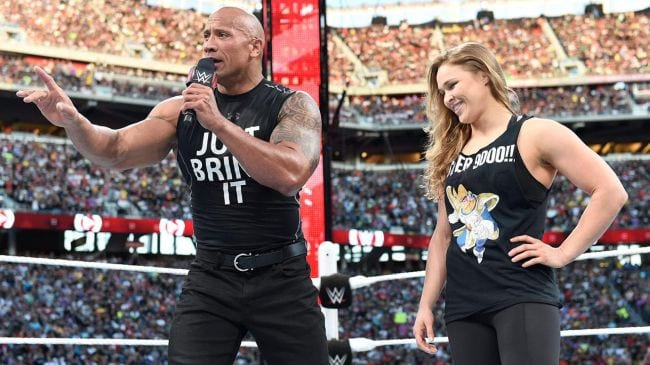 But, who is Ronda going to be fighting with on her side? Well, the first person that comes to our mind is The Rock. He has been with her during Mania 31 in her segment with the Authority. He could be making a return to face Triple H and Steph together with Ronda. That would make the most sense. If his schedule allows him, there is no doubt that this guy would be a good pick.

If not him, the second person that comes to mind is GM Kurt Angle who has had some beef with Triple H. That would make him a good choice as it would make sense for him to be in the match.