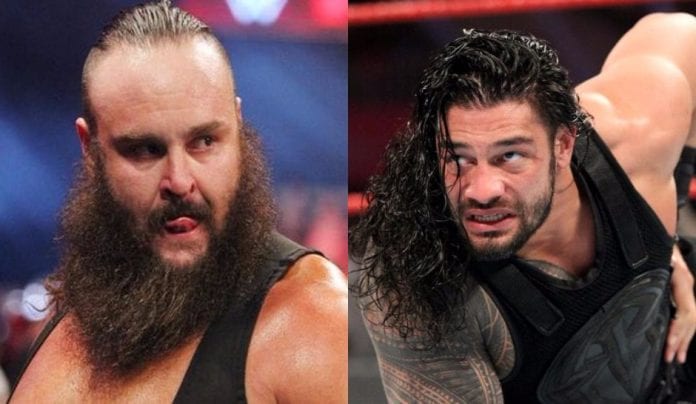 In one of the biggest matches on the Fastlane pay per view event, Roman Reigns will meet with the “Mountain of a Man” Braun Strowman. These two are feuding ever since Strowman cost Reigns the title at the Royal Rumble because Braun was promised a title shot by Kevin Owens, so he helped him get the win. Now, these two giants will meet on Sunday.

Strowman has been booked to perfection. He is looking strong, performs good and actually, people are interested in his character and what he does every single week. Not many people predicted that Strowman would be one of the best things on Monday Night Raw after the brand split took place.

On the other hand, Roman Reigns hasn’t been doing much on Monday Nights except burying the Raw Tag Team Champions, Anderson and Gallows. And even with them, he doesn’t look as strong as he probably should when he is going up against Strowman. He never got the better of Strowman as the Mountain of a Man always had the last laugh whenever they confronted.

Now, it will be foolish for us to expect that Roman will get pinned at the Fastlane PPV. That is not going to happen. We are just one month away from WWE‘s biggest show of the year, and their prized possession won’t lay down for a three count. But, neither will Strowman.

This is a match that screams no contest at you. Nobody will win this battle as there will be someone that will interfere in this duel and cause the DQ. It will be the Undertaker who will start his feud with Roman for Wrestlemania 33. Reigns was the one that eliminated the Dead Man, and he will return to get his revenge.

Our pick: Strowman wins by DQ caused by the Undertaker.