The Elimination Chamber is Raw’s next pay per view and their final event of that kind before Wrestlemania 34. The road to New Orleans has already started and the company is trying to put the best card possible. Stories are developing and gaining momentum each and every week.

Elimination Chamber is a big step toward the greatest stage of them all. In this year’s match, we are going to find out who is going to challenge Brock Lesnar for the WWE Universal title that he has been holding since Wrestlemania 33 when he beat Bill Goldberg.

There is no doubt that EC is going to be a great battle. Right now, we know that John Cena, Elias and Braun Strowman are going to be in this clash as they won their qualifying matches on Monday Night Raw this week.

Three more fights will be held on Raw’s next episode and we are going to find out who are the remaining three that will battle for the number one contender’s spot. WWE is advertising one of those matches right now as they want to attract as many people as possible to watch the show.

Roman Reigns is going to battle it out with Bray Wyatt for one of the remaining three spots in the Chamber. Since Roman is the number one pick to challenge Brock Lesnar at Mania and the guy to take the title from the Beast Incarnate, there is no doubt that he is the favorite in this match.

WWE has had him lose in his last three showdowns, which is a good sign that he is going to end up on the winning side and book his spot at EC after this clash is over. 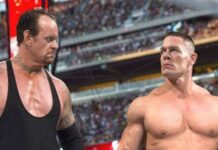 Is Undertaker Going To Respond To Cena’s Challenge?