During Sunday’s football match of Turkish Superleague between Akhisar Belediyespor and S.K. Fenerbahce, Dutch international Robin van Persie suffered a serious eye injury. His team won the game with final score 3-1 and van Persie even managed to get himself on the scoresheet before being taken out from the field on a stretcher.

According to sources, he suffered a torn eyelid which at first looked pretty terrifying. The injury happened before the half time, and Van Persie looked really bad. While lying on the ground with medics attending him, the camera caught a glimpse of his injury. With bloody bandages around his eye, it seemed like former Feyenoord, Arsenal and Manchester United player could suffer serious consequences of the hit he received before the end of the first period.

Early sources even claimed that there is a possibility of Robin van Persie losing his eye. Many believed in this news because pictures that were coming from the field looked more than serious.
Luckily for the Dutchman and all of us football fans this turned out to be a hoax. Medics from S.K. Fenerbahce have confirmed that he has torn his eyelid, that there was bleeding but that his eye and his eyesight are not endangered. In the end, it was obvious that initial reports were exaggerated and that it was only a minor injury. Later on, we could hear that 33 years old’s condition is stable.

This is van Persie’s second season in Fenerbahce jersey after departing from Manchester United in 2015 for an estimated fee of $4,300,000. Before the injury, Van Persie managed to score four goals in eight matches for Fenerbahce this season. One of those goals came at Old Trafford against his former club. In the end, if there is a good time to suffer an injury then this is the one. With van Persie being out of Dutch national team he will have enough time to recover during the international break. 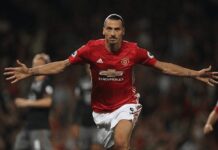 Machester United Wins against Zorya after a Goal by Zlatan Ibrahimovic