I had never really thought of visiting Mexico City before but when my flatmate Eugene Bernshtam invited me down for a weekend I thought ‘why not’! We ended up spending four days there in total over a Labor Day weekend and I have to be honest I have never been somewhere which struck me so much as this place did. In fact, I enjoyed my time there so much that 3 months later I went back down for another break, and just under a year after that, I decided that this was going to be the place where I was going to live.

I have been living in Mexico City now for just over 4 years and I absolutely love it. During that time my friends and family have all come down to visit me and each of them has felt the same as me when they’ve been here. If you have not yet visited Mexico City then here is exactly why you are going to fall in love with it when you do.

The best way that I can describe this city to those who haven’t visited yet is that it just feels alive with the buzz of action, life, and sounds. Some view this as chaos but I have never looked at it that way, it is instead just a city of millions of people who are going about their daily lives and to watch the hostel and bustle is quite something to behold. 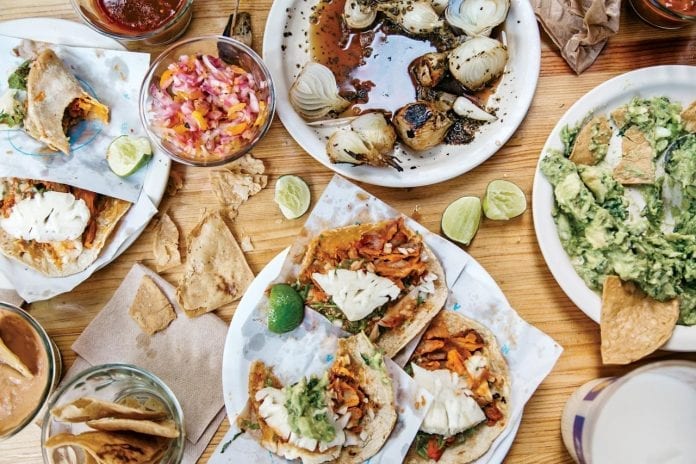 Something which Mexico has managed to do very well is safeguarded their traditional and local cuisine, something which al to of countries haven’t quite managed to do so well. The result of this is a plethora of local cuisine which is on offer on the streets and in the restaurants. Mexico City has long been the place where Mexicans from all states have brought their cultures and traditions to and that includes food. The consequence of this is that Mexico City offers food from across the nation and there are some amazing things to choose from.

When I first arrived here I couldn’t speak Spanish and there weren’t too many here that spoke English either. In some countries that I have been to this has been a real problem and not only have I felt rude that I couldn’t speak the lingo, but others also haven’t been too welcoming with me as a result. Here in Mexico however this couldn’t be any different at all and the ‘mi casa es tu casa’ is something which everyone seems to promote. I have never felt as welcome as I do here and everyone I meet is so kind and happy to show off their country.

This is a city which has plenty of modernity about it but it is also one which is steeped in ancient history. This is a city that has been occupied by both the Mayan and the Aztec civilization and this can be seen throughout the colonies here. From the Plazas de Tres Culturas within the city to the ancient ruined city of Teotihuacan which is just an hour outside of Mexico City, this is very much a place that wears its history on its sleeve, and it is fascinating to explore.

If you love museums then this is the city for you as here they boast over 150, more than any other city on the planet. The most famous of the museums is the Museum of Anthropology which features the highest volume of mesoamerican artifacts anywhere on the planet. There are museums dedicated to just about anything in this city and they are going to provide you with a constant source of day trips.

This may not sound like much when you read it but in all honesty, this is my favorite place to spend a Sunday, better than any other city that I have visited. It think much of this comes down to the madness of the week, and when all of that stops you really notice it. Sundays in Mexico City are still very much family days and everything feels so relaxed and easy. Head out for some delicious brunch, wander through the parks, enjoy a coffee and watch the world go by, or take a bike out on to the large route of the road which they close off every single Sunday. There is no madness, no chaos, just relaxation and plenty of space to breathe in the city on a Sunday, and when you get here you will see just what I am talking about.

What are you waiting for? Now is the time to come and fall in love with this wonderful city, come and see it for yourself.

Jewish Naming Ceremony Traditions – Everything you Should Know