There used to be a “rule” when it came to interior design and architecture that you couldn’t mix old and new. You weren’t “supposed” to mix styles at all for that matter. The idea was you picked a style, and you stuck with it through and through. That’s all out the window now, however.

Some of the most stylish and beautiful interiors are a mix of styles, and two styles that people love to bring together are modern and traditional. Combining modern and traditional has even led to a specific term –transitional interior design.
With modern interior design style, there’s the sense that it can be cold and stark, while traditional style can be overly ornate or even cluttered. When you bring these two together, you can eliminate the downsides and get the best of both worlds.

How do you make it work, however? Let’s say you have an impeccably cleaned and color-restored oriental rug that’s an antique piece. How do you mix that with a modern design style in a living room and still ensure that it looks pulled together and cohesive? Below are some tips to bring together modern and traditional style in your home.

You aren’t going to get a completely 50-50 mix of styles in most cases. You probably have a style that you prefer, and that can be what you consider the dominating style in a room or throughout your home. Once you choose the style that will dominate, whether that’s modern or traditional, it will give you a starting point for everything else.

When you have a dominating style, you can then build around that with accents that are from a different style.
Some designers describe this concept as the 80/20 rule. This means 80 percent of your design concept is based on your primary style, and then the remaining 20 percent is another style. If you already have more expensive furnishings that you want to incorporate and work around, then you’re probably going to base your 80 percent primary style on those.

For example, if your primary style is modern, you can then add in some antique pieces like your oriental rug and perhaps more traditional lamps or sofa tables.
When you’re picking a style, decide what your focal point will be as well. Your focal point in your living room might be your sofa for example, and then you can build around it.

Do You Want True Contrast?

You can have styles that are different from one another without contrast, or you might prefer the contrast. Decide between harmony and contrast.
If you go the harmony route, your items will look more like each other even if some are modern and some are traditional. With contrast, you might bring in varying colors and textures as well as different materials. Both can work well if you have an end goal in mind.

The key to mixing styles and really any design project is to have a plan. You want to create a layout and overall concept that works before you start putting things into a room.
Even with contrast, you still want to find some cohesive elements or at least one that runs through the items you’re choosing. For example, maybe it’s the colors or the finishes that you use as a basis for consistency.

If you want a cohesive design style, don’t overdo it. Don’t add so much into a room in an attempt to bring in modern and traditional that the room feels cluttered or overwhelming. Simpler can be better in home décor.

Use Color and Texture in Modern Spaces

Maybe you’re at a point where you love the modern look, and that’s what you want to focus on, but you feel like it’s not warm enough. You don’t even necessarily have to bring in traditional pieces of furniture to warm up a modern space.

Instead, go with color and texture to do it. You can bring in rich textures through throw pillows, rugs and window coverings. You can also do your wall color in a warmer shade than what’s usually seen in a modern room. Then, you still have that overall modern aesthetic, but it feels inviting and comfortable at the same time.

With some planning and thought it’s definitely possible to bring together modern and traditional in your home and make it work well. Ultimately what matters most is creating a space you’re comfortable in and you love, regardless of how you mix styles. 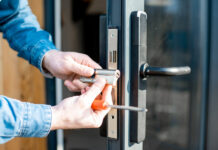 The Importance of Rekeying Your Locks in the Property 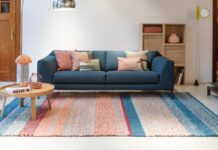