Opptrends 2022
Home Sport Raiders Proving That They Are Ready For Prime-Time After Comeback Win In...

After Drew Brees had hooked up with on a 98-yard TD play with WR Brandin Cooks, the Saints took a 2-Touchdown lead in the 3rd quarter, and everyone thought that it was game over for the Oakland Raiders. But Carr and company weren’t about to give up.

Derek Carr led the way with 319 passing yards on 24 completed passes and 1 TD. His by far favorite target was Amari Cooper as he recorded  137 receiving yard on six completions.

But, the most impressive play for the Raiders was Jalen Richard running 75 yards and scoring a Touchdown to give Oakland much needed wind in the back. At the end of the game and on the final play for the Raiders, Derek Carr was able to hook up with WR Seth Roberts on a 10-yard TD play to give the visitors a 35:34 lead that was also the final score of the game.

Many people picked the Broncos to win this division again, but Raiders received a lot of praise in the preseason, and a lot of people expect them to compete for that division title. Even though they were down by 2 TD, they responded like big teams do and good teams should, never gave up, and they were rewarded for their efforts.

If there were people who were doubting the Raiders about them being a serious contender for the spot in the Playoffs, they not know that Oakland is for real and on the rise, ready to make the Postseason after 14-year Playoff drought. 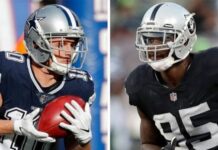 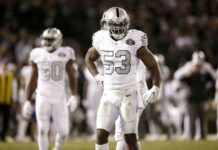