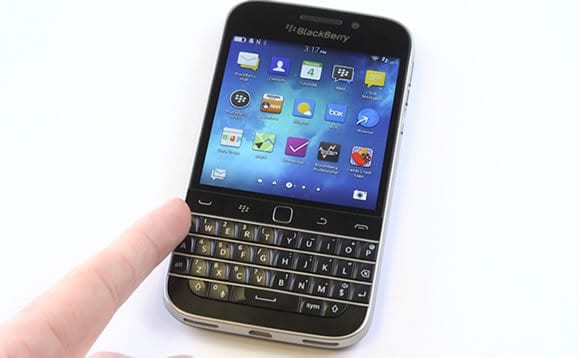 BlackBerry Ltd (NASDAQ:BBRY) (TSE:BB) Classic would now be available to the Canadian customers of Virgin mobile as well after Rogers agreed to carry the device on its network. On the cell phone splash page of Best Buy Canada we can see an offer for a free holiday phone and it has two smartphone devices displayed alongside – Xperia Z3 and BlackBerry Classic.

The Classic device from BlackBerry Ltd (NASDAQ:BBRY) (TSE:BB) goes for pre-order in stores on either Rogers or Virgin mobile claims Best Buy. The 3.5-inch screen device was announced by the company last week, and it runs on a powerful 1.5GHz Snapdragon S4 processor. The dual camera device has front camera of 2MP and an 8MP rear camera. It has a powerful battery of 2515mAh.

The device has BlackBerry 10 operating system pre-installed, and the hardware keyboard is also there. The ‘belt’ row of function keys is also there that includes the call, menu, track-pad, back and end buttons. The pricing has not been announced yet.

BlackBerry Passport is going to be introduced in two more color variants – red and white – as announced by the CEO. Online pre-orders for both have started on November 24, and the devices will be on sales November 28 through ShopBlackBerry.com and Amazon.com for delivery in North America.

“We are thrilled with the positive reception the BlackBerry Passport has received since we launched in September,” explains BlackBerry CEO John Chen. “The introduction of the red and the white BlackBerry Passport colors underscores our commitment to break through the sea of rectangular, all-touch devices, offering different styles that meet mobile professionals’ personalities.”

Those interested in the limited edition BlackBerry Passport red and white devices should pre-order those ASAP as it could run out of stock anytime. The Passport has been created by BlackBerry Ltd (NASDAQ:BBRY) (TSE:BB) with an aim of competing with the iPhone 6 and Galaxy Note 4, and to lure the corporate buyers as the device boasts of productivity tools.

The success of these moves from the company is yet to be seen, but the users now have an option for different devices other than Apple and Samsung.