All of the muscle cars in the past were driver-focused and in generally they didn’t offer much utility, but this has changed over the years. However, in 1985 General Motors produced the Pontiac Firebird Trans Am Kammback concept in order to try to tackle this issue. The name Kammback comes from German engineer Wunibald Kamm.

This concept never reached production, but one of the prototypes is on the list for Barrett Jackson’s 2017 sale in Scottsdale Arizona that will last from January 14 to 22.

The Trans Am in question is equipped with a 5.0-liter V8 that is mated to a five-speed manual transmission. Even though it was built in 1985, the vehicle contains air conditioning, power windows and locks, cruise control and tilting steering wheel.

In order to reduce drag, the car sports a rear that cuts off to a flat tail, and there is enough cargo space, while the fuel economy and top speed are admirable. GM was apparently serious about the production of such a bizarre-looking vehicle.

The company decided to keep the test mules, which led to the sale of one of them in 1998 to a Pontiac dealer from Detroit who restored it. This concept comes with a bill of sale because it is an original version, but its future owner will not be able to license this car for the road. 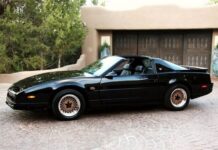 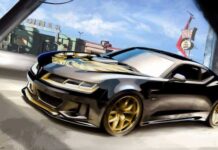 Smokey and The Bandit’s 40th Anniversary – Must See Renders 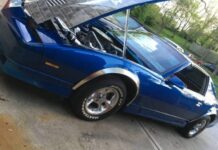 A “Beautiful” Pontiac Firebird Trans Am up for sale on Craigslist in Kansas City!