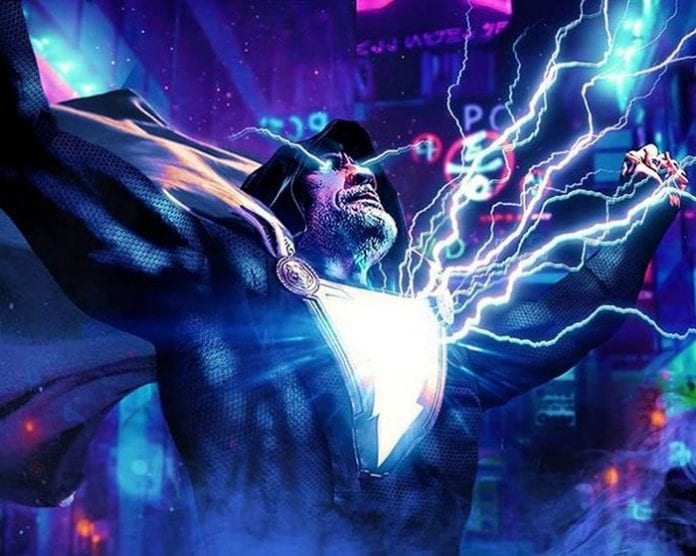 The filming of upcoming movie Shazam! has hit the ground running, as the photos from the set are flooding the internet. Zachary Levi was caught wearing a superhero costume. The images and Shazam! logo are now even available on official website of DC Films. The movie is rumored to have an appearance of Black Adam, but there are no official photos of that antihero who will be played by Dwayne The Rock Johnson. But, what we do have is another fan-art masterpiece depicting Johnson as Black Adam.

Black Adam is as you probably know is Shazam’s archenemy. Thanks to the imagination of MessyPandas from Instagram we now have a new photo of Black Adam. His appearance is based on the facial features of Dwayne Johnson, and the costume in which Zachary Levi was pictured. The suits are similar in the comic books from which the superheroes draw origin. Because of that, this Black Adam fan-art looks as real as it can get. The creators of this upcoming movie could be inspired by MessyPandas work.

Seeing The Rock rocking Black Adam suit was a sight for sore eyes, but regardless of rumors he probably won’t appear in Shazam! movie or he will have a very small role. The creators of both films wanted to give space to both characters to develop in their movies. This is why they are starting in separate films before appearing in one where they will share more screen time.

When asked on this subject Jumanji: Welcome to The Jungle star stated: “I think they’ve got a great plan over there with him and I wish those guys the best of luck. We had to split the idea because the obvious idea was Black Adam and Shazam. So, we split it. Those guys are gonna do great with it.”

So, we’re going to have two movies before Shazam, and Black Adam appear together in one, but that didn’t stop the fans from merging them. Below you have a fan-made trailer that depicts the battle between the two. But, before this fight becomes the real deal, other sources are saying that Dwayne Johnson’s Black Adam might make an appearance in upcoming Suicide Squad 2. Well, we’ll just have to wait and see.