Opptrends 2021
Home Entertainment Phelps vs. Shark!? Is it real and what’s it all about?!

Well, it is highly unlikely that you do not know what a shark is and it is a sure thing that you heard who Michael Phelps is. Both of them are pretty fast under water, but this here is supposed to prove who is faster. Phelps is one of the most talented athletes of all time with 23 Olympic gold medals as well as another 5 Olympic medals of other kinds that back him up, but the shark just has years of evolution which made it what it is.

The title is clear, although a little confusing, but it is clear. This test is supposed to pit Phelps against a great white shark in a competition of speed. To avoid the worst possible scenario (for Phelps of course), these two are not going to swim side by side in their respective lanes but each will swim a specified length and the people involved in the Shark Week special will compare their speeds.

This all sounds a little ridiculous, and dumb to be honest, but it is happening regardless of that. Everyone who is familiar with sharks knows that these animals are impossible to out-swim regardless of how fast or good swimmer Phelps is. He is just a human, and that means that he is not that well-adapted for life in the sea. Those of you who follow Shark week know that these apex predators can reach speeds of up to 25 MPH while Phelps’s best is somewhere around 6 MPH.

But there are some things that go to Phelps’s advantage like the fact that great white sharks are capable of such speeds in no more than short bursts which mean that in a 100-meter dash Phelps has a good chance to out-swim it (possibly). Then there is one more key info, and that is that Phelps will be wearing a monofin that will enable him to increase his speed to somewhere around 12 miles per hour.

This little test will happen on Shark Week special and with all things said we are debating whether this nonsense is even worth switching to that channel and watching it. There is a huge chance for debacle because there is a sure chance that the great white shark will deviate from the intended course because it doesn’t understand what it needs to do. One thing must be praised, and that is the catchy title that will surely make everyone ask themselves what this is all about. There is no doubt that most will tune in to see Phelps vs. Shark and the rest of Shark Week to see the winner if we actually get one. So it is up to you to decide will you watch this or not! Let us know how it went. 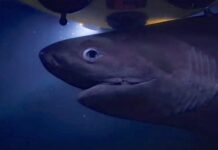 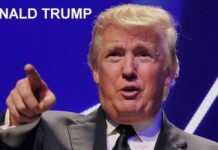 Top 10 Most Googled Persons on The Globe 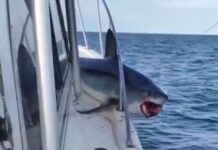 Mayday, Mayday! There is a shark on the…Boat?!