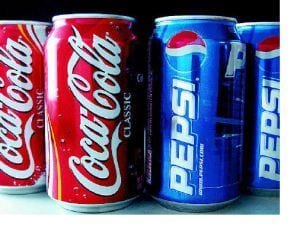 The Coca-Cola Co (NYSE:KO) successfully maintained its number one position in terms of sales last year, but the sugar-free alternative Diet Coke lost its spot to PepsiCo, Inc. (NYSE:PEP). Beverage Digest recently released new figures that concludes that the sales of Diet Coke declined by 6.6% while that of diet Pepsi declined by 5% last year.

Overall sales have grown at a decent rate for both the companies in 2014. Fizzy drinks have been very much in demand in the U.S., but owing to the growing concerns over health, the popularity has declined by large over the last decade. A substantial rise in the overall sales of The Coca-Cola Co (NYSE:KO) was noted in 2014 after a long time since 2000.

The Beverage Marketing Corporation of New York informed that in the U.S. a growth of 2.2% was noted in the overall refreshment beverage market even though the sales of fizzy drinks were on a decline. The total worth of US drinks business was estimated at $160 billion in 2014 as informed by the consultancy.

Demand for healthier drinks on rise

A massive decline has also been noted in the demand for the low-calorie alternatives. These drinks make use of artificial sweeteners like aspartame, which are a major reason behind the decline as users are concerned about the side-effects. Therefore, the demand for the healthier drinks has been on a rise.

In 2014, bottled water helped Nestle gain 9% in sales. Popularity of the energy drinks and cold coffees was also on rise. “There has been a tremendous migration to other categories in recent years,” John Sicher, editor of Beverage Digest, told the BBC.

A major problem is facing most of the developed countries i.e. obesity and health and wellness, and therefore, most of the major beverage brands are now being scrutinized for the ingredients used by them, added Sicher. Therefore, the companies like PepsiCo, Inc. (NYSE:PEP) and The Coca-Cola Co (NYSE:KO) are now trying to use natural sweeteners for their beverages along with bringing down the calories. Regular Coke has 42 calories per 100 ml of drink while the new drink Coca-Cola Life has just 27 calories per 100 ml. This new drink is made with Stevia sweetener.