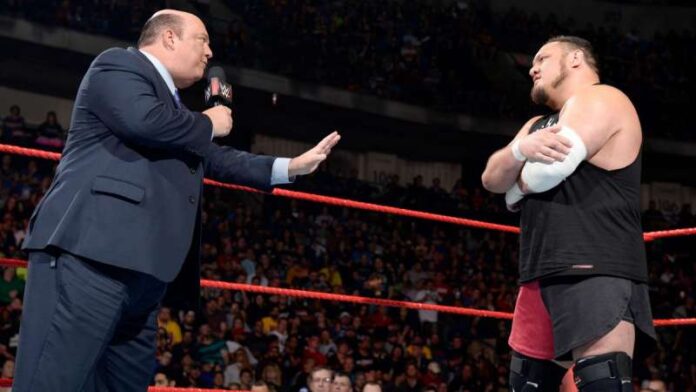 Paul Heyman is one of the best talkers ever in the WWE and somebody that has a lot of influence and respect backstage. Even though in storylines he is working with the Beast Incarnate Brock Lesnar, the fact of the matter is that Heyman thinks really highly of Samoa Joe. We don’t blame him. Why shouldn’t he think highly of Samoan Submission Machine after the kind of performances he has had over the last couple of weeks on the mic and in the ring.

According to Justin Barrasso of the Sports Illustrated, Brock Lesnar is going to take another big break from the WWE after the Summerslam season ends. On the other hand, WWE officials want to have the Universal Title on the Monday Night Raw more often, which would mean that the title needs to change hands. Therefore, people in the company are seriously going to think about putting the title on somebody else instead of Brock Lesnar.

Samoa Joe has been phenomenal in the feud with Lesnar, earning both Heyman’s and Lesnar’s respect. There were even reports that Lesnar was pushing for the feud to continue after the Great Balls of Fire pay per view, which it did, Now, according to the reports, Heyman wants Joe to be the one to win the title at Summerslam if the decision is made to take the belt off of the Beast Incarnate.

Fans would probably have nothing against that since they want the championship to be on the show more often. Samoa Joe has gotten himself over with the fans during this battle with Lesnar as people are now chanting his name each and every time he makes an entrance. Samoa Joe looks like a solid choice to be the next Universal Champion and the main guy on Monday Night Raw.