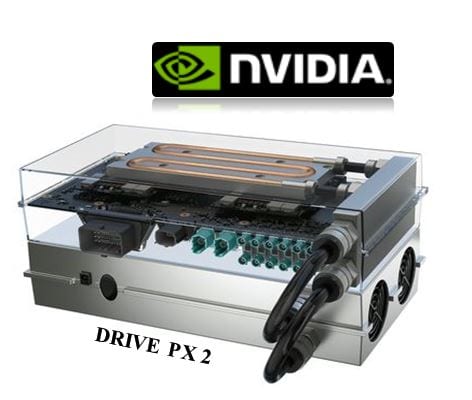 NVIDOA DRIVE PX 2 uses deep learning on the company’s most advanced GPUs for 360-degree situational analysis around the car to determine the exact location of the car, and calculates a safe and comfortable route.

He added that the company’s GPU is key to the advances in deep learning and supercomputing. According to him, they are using those advances as a leverage to develop the brain of the future self-driving cars that will be continuously alert and eventually achieve exceptional levels of situational awareness.

According to the company, the NVIDIA DRIVE PX 2 offers extraordinary amounts of processing power for deep learning equivalent to 150 MacBook Pros.

The supercomputer is integrated with two next-generation Tegra processors and two new discrete GPUs based on the Pascal architecture. It can deliver as much as 24 trillion deep learning operations per second.

NVIDIA DRIVE PX 2 learns quickly to address the challenges of everyday driving such as construction zones, erratic drivers, and unexpected road debris. Its deep learning capabilities can also address numerous problems such as poor weather conditions and difficult lighting conditions. Its GPU architecture can do up to 8 trillion operations per second for general purpose floating point operations, which enables automakers to address the full range of autonomous driving algorithms including sensor fusion, localization, and path planning.

DRIVE PX 2 can process inputs from 12 video cameras, plus lidar, radar and ultrasonic sensors, and fuse the information to detect and identify objects and determine the car’s location based on its surrounding and calculate the best to travel safely.

NVIDIA offers end to end solutions for auto industry including NVIDIA DIGITS and NVIDIA DRIVE PX 2 for training a deep neural network and deploying the output of that network in a car.

Volvo Group is the first customer of NVIDIA for its supercomputer for self-driving cars, according to Reuters. The company said more than 50 automakers, tier 1 suppliers, developers, and research institutions already adopted its artificial intelligence platform to develop self-driving cars.

How to Recover Data from a Corrupted or Crashed Hard Drive

Are you up for a free ride in Google’s self-driving car?