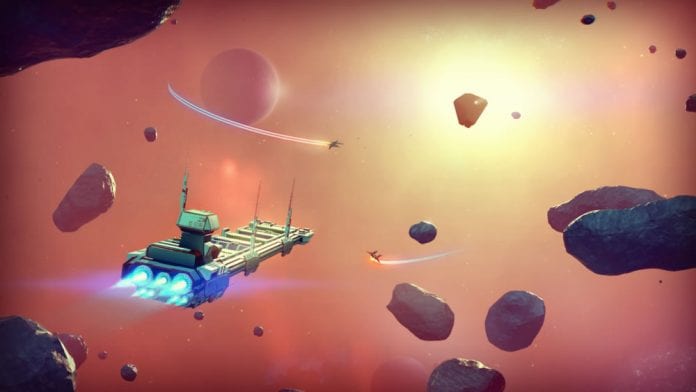 As No Man’s Sky fans have probably heard, a gamer who goes by the infamous reddit username daymeeuhn has purchased a leaked copy of the anticipated game for $1300 earlier this week on Ebay. daymeeuhn has also released playthroughs of the game and his personal opinion about the game which many people believe is killing the hype surrounding the game.

The leaker mainly complained about the various bugs the game had however, Hello Games founder Sean Murray has already responded by announcing his company’s first update which went live today. The update dubbed “Update 1.03” addresses various bugs and exploits in the game while introducing various new gameplay elements.

What’s important about the update

The most important aspect of the update is the removal of exploits. People who had early access to the game such as daymeeuhn completed the game quickly due to the exploits that were present in the game before the update. However, the infinite warp cell exploit and rare goods trading exploit which allowed the duplication of rare items has been removed therefore increasing the amount of time required for game completion.

Furthermore, an important aspect of the game that people with early copies did not experience is the community and MMO aspect of the game. The game will heavily rely on a curious online community that share their findings and experiences online. Also, in the update No Man’s Sky multiplayer experience has been accentuated with the addition of Galactic Maps that display star systems that other players have discovered, and the inclusion of in-depth trading with the value of in-game items being derived from a galactic economy.

Multiplayer is important in No Man’s Sky as it allows the large amount of players to discover the infinite and procedurally generated universe of No Man’s Sky at a faster pace. However, the large player base will find it even harder to fully discover the universe with the introduction of even more content in Hello Games’ first update.

There are now three different paths the player can embark on to reach the center of the universe which has been expanded to become 10x larger. In fact, the entire universe has been altered with planets being relocated, and these relocated planets now posses a variety of environmental conditions and biome formation, which contain terrain with more geometric variety.

The creatures living within these environments have specific diets that the player can use as a reference to properly feed the creature creating unexpected results. Players can live among the creatures of a planet because the new update has enabled the construction of bases which is important for a journey that requires light years of distance to be covered.

Beyond the planets, space stations are more intricate and detailed with bars and trading rooms. In addition, space combat has been enhanced with more skill required to become victorious in intergalactic battles that are now even larger thanks to the update.

The amount of change in Update 1.03 has reinstigated the hype for the game, and even early-copy holder daymeeuhn explained in a recent reddit post that he is excited and happy for the update. Hello Games has proved to consumers that game companies do listen to the criticism of their fellow gamers and that a game can be improved drastically in a short duration of time.

So far, the update seems to have enough content to create a No Man’s Sky sequel, and this update has removed the doubts of No Man’s Sky critics and skeptics as PS4 users anxiously wait for tomorrow’s release and PC users envying the earlier PS4 release until the confirmed PC release this Friday.

Check out Sean Murray’s say on the update here.