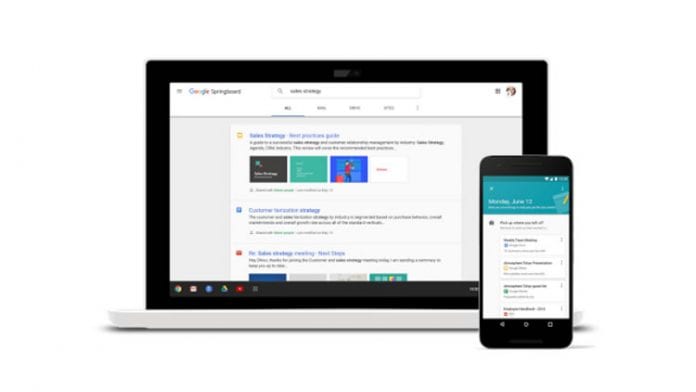 Google has launched a new app for enterprise users, the Springboard Enterprise Tool. Google says that the new tool will help them in searching for information more easily and conveniently from various other Google apps such as Gmail, Docs, Calendar, Drive, Groups, and also other applications.

Google Springboard, the new tool was announced this week and will act in aiding users when it proactively serves up some actionable information and any recommendations which might be relevant to the work that they need. Google, however, did not specify the type of work that Springboard would also show or on how the information itself would come out.

However from the given description, Springboard might just be the same thing with the Google Now on Tap Android app, which has been serving up contextual information during the various searches which are conducted by users who use the Google apps on their mobile devices.

Google Springboard was tested for months

The Vice President of Engineering at Google Apps, Prabhakar Raghavan, said that the company together with a small beta tester group had been previewing the Google Springboard tool over the past few months. Through an early adopter program, the tool is being made more available to the various enterprises.

The search giant also announced some new updates to the Google Sites app, which is there to build intranets for the project collaboration of information sharing within the enterprise. The updates are also there to make the enterprise workers be able to build pages that can make them distribute their content across the enterprise and they don’t have to worry about optimization of the content on the various screen formats.

There is a drag and drop component, which makes it possible for multiple workers to work together from different apps but in real time. Raghavan said that there were new templates which contained themes and layouts that were now being automatically scaled to fit the different screen sizes, and they were all available on the newly refurbished Sites.

Companies that will sign up for the early adopter version of Sites will also still have access to the classic version of the Google Sites. This gives users the freedom to share and edit content as they are at the moment, and when the new Sites program becomes available to the general public, then the organizations would have a smoother time transitioning to the new platform.

Raghavan said that Google was no newbie to helping its enterprise customers to sort through their corporate information and helping to make it better for the employees. He also said that the new and improved Sites was a testament that showed how the company was making an effort to build great things by incorporating new machine intelligence capabilities and also integrate some other features from the Google Web Search Engine Technology.