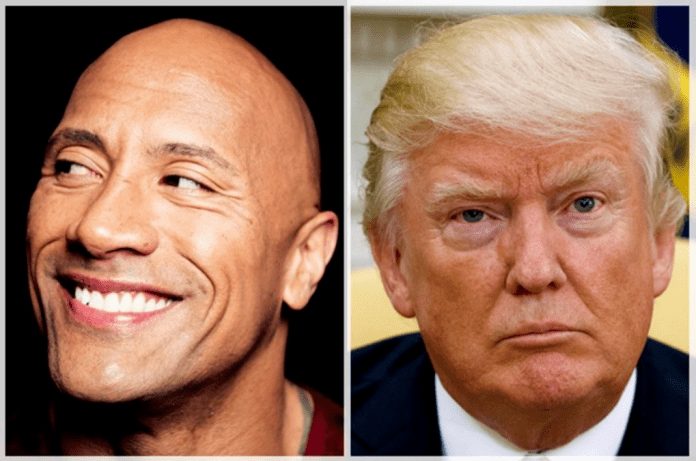 If we take a look at the polls, it is clear that Dwayne The Rock Johnson is already ahead of President Donald Trump in popularity and if elections were set up for tomorrow, he would beat his “candy ass” if we are allowed to quote famous wrestler.

On more than a few occasions we could hear stories about how Dwayne could and should run for the president in 2022. In a recent interview with GQ, this man confirmed that there is a possibility for something like that to happen. Public Policy Polling conducted a poll, and according to their research, The Rock would take the victory over Trump with 42/37. Here is what famous actor said, “I think that [running] is a real possibility.” We need to add that it is a way too early to speculate about all these possibilities and this might be only wishful thinking.

The results of the poll also showed that the job Trump is doing has only 40 percent approval rate while a total of 54 percent voters are disapproving. This time around it has been recorded that there is 48% of the participants who are for impeaching Trump and 41% that are against it. Another question was whether the POTUS would stay for the entire term and only 43% opted to say yes.

On numerous occasions, we could hear reports from the White House that the public doesn’t care about Trump’s tax returns, but this poll indicates that the situation is completely different. About 62 percent of voters stated that head of the state should provide this info, and, on the other hand, only 29 percent said that he should not do it.

Just another interesting thing from this poll is about the Civil War. Trump stated how the Civil War could have been avoided and that his favorite president, Andrew Jackson, would be able to prevent this from happening. Only 16% of participants agreed that Jackson, who died 16 years before this conflict, could prevent that from happening. Total of 43% of voters believes otherwise, and only 20 percent of voters think that Trump would be able to stop the Civil War.