New England Riptide was a member of National Pro Fastpitch from 2004 to 2009. This women’s professional fastpitch softball team was based in Lowell, Massachusetts. Since 2009 the team is no longer in function.

The 2004 season was their first in NPF. It ended with Riptide winning 25 matches and losing 35 during the course of the season. This record was enough to secure them fourth place in regular season. They even reached the championship game in the postseason but eventually lost to NY/NJ Juggernaut.

In their second season, New England Riptide improved to 25 wins, 23 losses record. During the 2005 season, the pitching staff was led by Jocelyn Forest and Danielle Henderson. Forest ended the season with an 8-2 record after having an ERA of 1.09 in 77 pitched innings. Henderson was Riptides’ leading pitcher with 125 innings pitched, for an ERA of 1.96 and 150 strikeouts. Another standout player was Kellie Wilkerson who was New England Riptide’s leader in average (.435), on-base percentage (.602), slugging percentage (.681), stolen bases (6), walks (8), and home runs (4). Wilkerson also filled in pitching during 2005, in addition to being Riptide’s offensive leader.

During 2006 season, the team played only 41 games, ending the year with 24-17 record. The pitching staff was once again led by Jocelyn Foster. With 15 wins to her name, she topped both the team and the league in this segment. Foster had 1.29 ERA, and 107 strikeouts in 130 innings pitched. The New England Riptide offense was very well balanced in 2006 with few outstanding players which include the likes of Lyndsey Angus, Lindy Winkler, and Tarrah Beyster.

New England Riptide won their first NPF Championship after defeating Connecticut Brakettes by a 2-0 score. The NPF Championship Series Most Valuable Player award went to Jocelyn Foster after her impressive display vs. Brakettes. She managed to strike out seven and stranding seven opposition players during the games.

The Riptide’s finished 2007 season in the third position after 26-18 record. Their ace during this season was Eileen Canney of pitching staff after ending the season with 9-6 record. Through 2007 season Canney had 1.16 ERA and 137 strikeouts. In both categories, she led the league. The rest of pitching staff consisted of Erica Beach, Jocelyn Forest, and Danielle Henderson. Their offense was led by Scott Shanel who had 324 batting average, 34 stolen bases, 26 walks, and 35 runs. These numbers don’t look too impressive because entire offense was very well balanced with eight players averaging over .250.

New England Riptide ended the 2008 season in 4th place with 22-26 records. Eileen Canney was once again the leading player with a 2.29 earned run average and 13 wins. During the same season, she also had 150.1 innings pitched, and 18 complete games. On the offensive side of the ball, Riptide’s were led by Jackie Pasquerella and Jess Merchant. Pasquerella led the New England team in average (.354) and hits (45) for the season. Merchant, on the other side, drove the Riptides in home runs (6), doubles (7), and RBI’s (26).

After the 2008 season, the team known as New England Riptide seized to exist. The reasons cited for franchise cessation was the lack of funds to keep the team running, and no money income because of lack of interest from sponsors.

There were talks, and fan hopes that the team is going to be resurrected for 2011 season, but those plans failed to materialize. The same story appeared in 2012, but the lack of funds was still the primary issue and remains one to this day.

Follow this link if you want to join the movement for bringing back the Riptide. 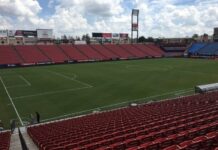 New England and Dallas to Meet in the Final of USOC